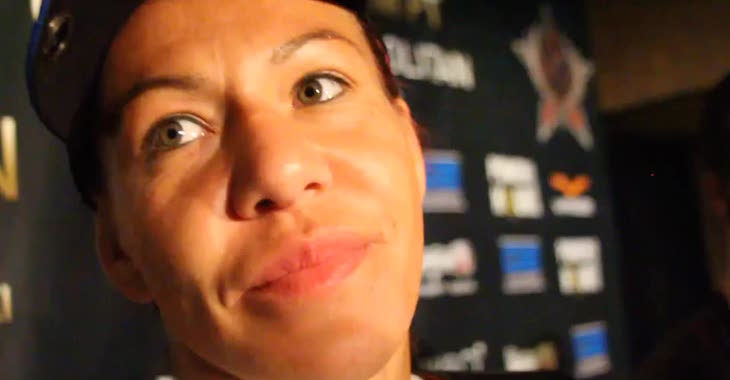 Invicta FC featherweight champion Cris Cyborg is widely believed to be one of the best, if not the best, women’s MMA fighters of all time. With an 11 year professional MMA career, Cyborg has lost just once, her first professional fight, and has gone on to rattle off 17 straight wins over the course of the past 11 years.

Despite that, it wasn’t until mid-2016 that the Invicta champ made her UFC debut. When she stepped into the Octagon at UFC 198 back in May, it took Cyborg just over a minute to TKO Leslie Smith, cementing her place as one of the best WMMA fighters on the planet. While she called for the UFC to form a women’s featherweight division, UFC President Dana White remained adamant that there aren’t enough female fighters competing at 145 pounds to warrant the UFC making a division. With that being said, Cyborg stepped into the Octagon once again at ‘UFC Fight Night: Brasilia’ where she squared off against Swedish striking phenom Lina Lansberg. Despite a brutal weight-cut that saw the Invicta champ cut nearly 10 pounds in 24 hours, Cyborg won the fight via 2nd round TKO. Following the fight, White once again reiterated that there just simply aren’t enough women fighting at 145 pounds for the UFC to create a featherweight division.

That didn’t sit too well with Cyborg, who spoke to MixedMartialArts.com to discuss the situation, as well as why she feels that the UFC hasn’t given her the push that they gave Ronda Rousey.

do for ‘Cyborg’?’ Well, he’s lied. He also never said Ronda looks like Wanderlei (Silva) with a dress. He never said that about her even though he said that about me. For almost six years, I’ve had to see him control the media. Hear Ronda say I have a (penis) and that I have to cut my (penis) off to make 135. I’ve had to deal with this.”

“I do MMA just for sport. I’ve been doing this 10 years. I haven’t lost in 10 years and they don’t respect me,” she added. “Tell me, if there was an American girl who went 10 years, undefeated, you don’t think they’d make something special?”