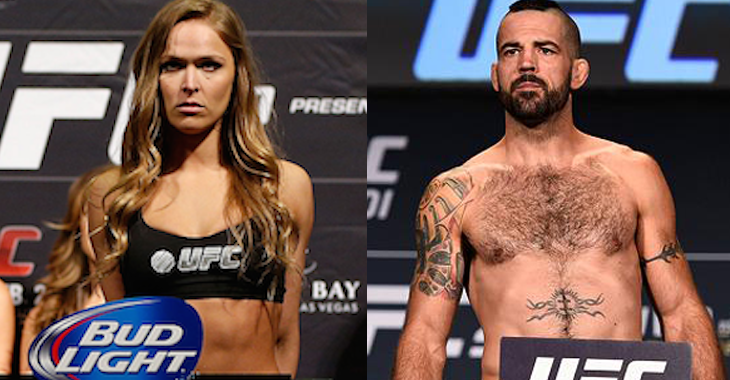 Matt “The Immortal” Brown has had the bitter taste of defeat before but has always bounced back from adversity. Coming off a devastating loss to Jake Ellenberger at UFC 201 in July, Brown has taken some time off to recover and ensure that he minimizes any risks of brain injury but will be back in the Octagon at UFC 207 on December 30 to face Tarec Saffiedine.

The main event of UFC 207 will feature the return of former women’s bantamweight champion Ronda Rousey, who has been out of competition ever since losing the belt to Holly Holm at UFC 193 back in November 2015. Rousey will be getting a chance to get the title back as she takes on the champion Amanda Nunes in a five-round title fight.

Brown recently expressed his feelings on Rousey’s return and her character on a recent episode of the Fight Society podcast as they both are set to compete on the same card.

“I don’t really have a lot of respect for Ronda to be honest,” Brown stated (as transcribed by Damon Martin of FOX Sports). “She’s done some great things for women’s MMA and I respect that and she got it in the UFC and I respect that. But her attitude, I just don’t respect. She’s probably not going to change that.” With the loss affecting Rousey in such a dramatic way, Brown contested the former champion’s motives in the sport.

“I look at it different. I look at what are you in this sport for? What’s your motivation?” Brown questioned. “When you look at someone like her that one loss destroys you like that? We went over this whole thing about talking about suicide. My kids watch that (expletive), I don’t want to hear her talking about that crap when my kids are watching that show. When you let one loss do that to you what it’s done to her, I don’t respect that. That means your motivation is different than it should be. It’s not pure. It’s just not what I would call satisfactory.