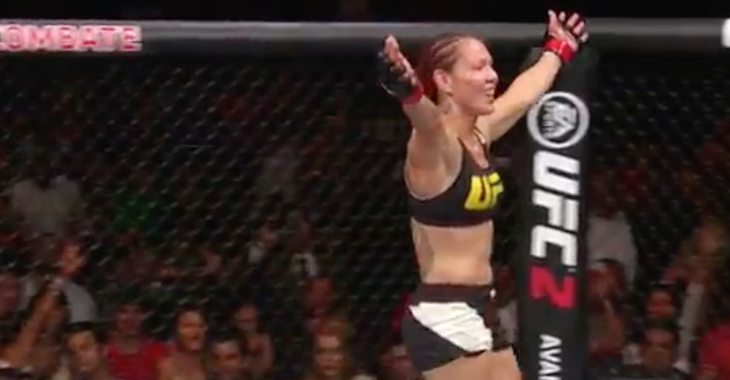 Cyborg made her UFC debut earlier this year at UFC 198 when she stepped into the Octagon against gritty MMA veteran Leslie Smith. Despite enduring a brutal weight cut, during which footage emerged of Cyborg crying while attempting to make weight, the Invicta FC champ won the fight via 1st round TKO, putting on a rather impressive display in her UFC debut. It would be four months until Cyborg returned to the Octagon, where she faced Swedish striking ace Lina Lansberg in the main event of ‘UFC Fight Night: Sao Paulo’. Again, despite a brutal weight-cut, Cyborg won the fight via 2nd round TKO in impressive fashion, dominating the fight from bell to bell.

Unfortunately, Cyborg has been campaigning for the UFC to create a women’s featherweight division in order for her to compete with the promotion full time, rather than just competing in catchweight fights with no potential to earn a UFC championship.

She spoke to El Comerico to give the UFC an ultimatum:

“I’ll keep fighting so that hey open more divisions,” Cyborg said. “If I don’t have a division in the UFC, I’m going to go to another company like Rizin or Bellator or another organization where they have my division. I’ll keep fighting for that.”

Cyborg recently gave a separate interview in which she explained that she was done competing in catchweight fights in the UFC given that the weight cuts are extremely difficult.

With that being said, Cyborg reiterated that she will be ready to fight in early 2017, but only at 145 pounds:

“I don’t know yet, probably next year,” Cyborg said. “In February, I’ll be available to fight. I’m ready for whoever at 145 pounds.”