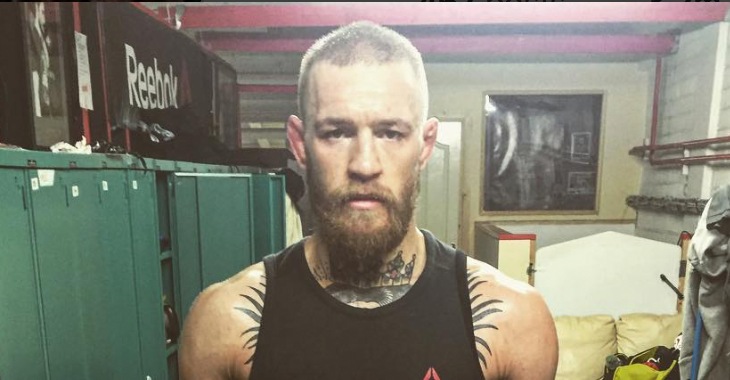 UFC featherweight champion Conor McGregor is taking a step towards making history on March 5 at UFC 196. McGregor will attempt to be the first fighter in UFC history to simultaneously hold two division’s championship titles. However, McGregor will have a daunting task standing in front of him on March 5, with lightweight champion Rafael dos Anjos looking to derail the McGregor train.

Check out Conor McGregor in one his most recent photos uploaded to social media. “The Notorious” captioned his post, “Nothing pretty in this game but the pay.
#HardMotherFuckingWORK.”

Nothing pretty in this game but the pay. #HardMotherFuckingWORK

McGregor will happily get an extra 10-pounds in the weight limit of 155 pounds for the lightweight division. His usual 145-pound limit in the featherweight division has been a tough cut for him in the past. Even McGregor’s coach John Kavanagh said after McGregor’s last bout to become the UFC featherweight champion in his brutal 13-second knockout of former champion Jose Aldo, that he never wants to see Conor cut to that weight again.

McGregor has since then expressed his interest in fighting to defend his title in the featherweight division with Frankie Edgar and Jose Aldo both wanting a fight with “The Notorious.”

However, in recent rumblings, McGregor and his team have also expressed interest in moving up even further in weight. Kavanagh said that if McGregor defeats dos Anjos at UFC 196, it wouldn’t surprise him if they go ahead and challenge Robbie Lawler for the 170-pound welterweight championship. Kavanagh said, “We’re already talking about making history in a few weeks, but can you imagine what it will be like if Conor is the champion in three weight classes by the summer?”

Do you think UFC President would allow that welterweight championship fight to happen if McGregor beats Rafael dos Anjos on March 5? Share your take on the fight between Conor McGregor and Rafael dos Anjos, and what will be next for “The Notorious” by leaving a comment!