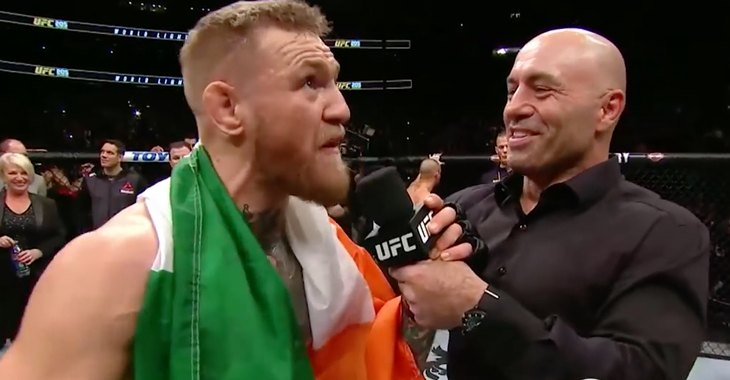 On the most recent Fight Companion episode of the Joe Rogan Experience, host Joe Rogan delved into the topic of a possible Floyd Mayweather vs. Conor McGregor boxing mega fight – a mega fight that is looking more possible by the day.

In this segment, Rogan began by referring to this much discussed Mayweather-McGregor fight as the biggest fight ever.

His words (via MMAFighting.com):

Rogan then weighed in on McGregor’s chances of victory, saying such a thing is possible despite the Irishman’s underdog status.

“Mayweather would have to dismiss him as a threat. He’d have to not train hard enough, he’d have to not seriously consider the possibility that Conor connects on him and knocks him out. And then Conor would have to do some roughhousing. He’d have to hold him in the clinch. He’d have to hold him and hit him. He’d have to try and get off as many shots and bully him around and wear him out. It’s a possibility. He’s a much bigger man. He’s a much bigger man. If you compare the two of them frame-wise, if they ever do do it, and they’re standing right at each other, looking down at each other doing eye-to-eye, you’re gonna go ‘oh, s**t.’ [Conor]’s a big f**k. He can make that 145-pound cut when he’s on death’s door, but Mayweather makes it easy.”

Do you give Conor McGregor a chance in a boxing match with Floyd Mayweather? Sound off, PENN Nation!