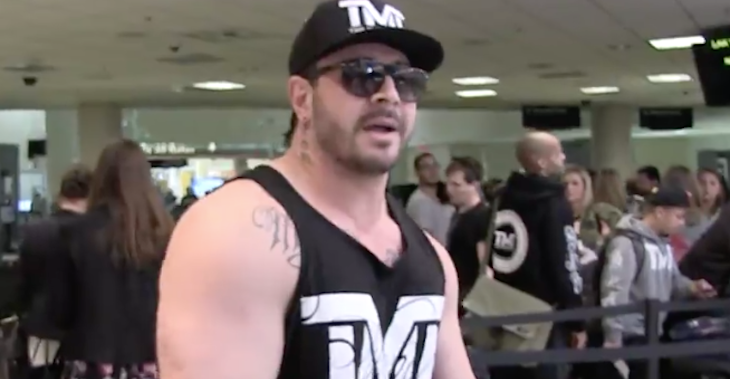 Throughout the course of the Floyd Mayweather vs. Conor McGregor world tour, UFC lightweight champion Conor McGregor repeatedly referred to members of the TMT Security Team as ‘juice heads’ insinuating that the men were taking steroids.

The press conference which resulted in the most notable beef between McGregor and Mayweather’s security team came during the third stop of the tour in Brooklyn, where Greg La Rosa says he offered to take a USADA test to prove to Conor McGregor that he doesn’t use steroids. He recalled the situation to Submission Radio:

“In Brooklyn, basically, Floyd said, ‘point to the easy work,’ and we pointed at him and he started saying the ‘tapout’ stuff and I think that was getting to Conor so he kind of drew his attention to that and he looked over at me and the other guy Ray (Jizzy Mack) and he said, ‘look at these two juice heads,’” La Rosa recalled. “So I guess at that point he probably had enough of him, he had to go at me. So I thought it was very, he looked at me and he said, ‘look at these two juice heads,’ and Floyd, I can’t remember what Floyd said after that. Floyd said something after that.”

“So I think he walked away for a bit and then he came back and said some stuff to me like, ‘you’re on juice,’ and I told him right there, I said, ‘no, never,’” he continued. “I said, ‘I’m not’. I said, ‘I’ll do a USADA test right now and I’ll bet you a hundred thousand dollars that I’m not,’ and he said, ‘yeah right, yeah right,’ and I said, ‘I’ll take it right now, I’ll take the blood right after the show.’”

“And it kind of got him like, ‘no way’ and he said, I think he said something along the lines of, ‘this is a real body,’ or something. And then I just told him, I said, ‘you know what, when you’re standing next to me’, I said, ‘put on a shirt cause you’re embarrassing yourself standing next to me’. I figured it would just rattle him up a little bit. That’s all it is for me.”