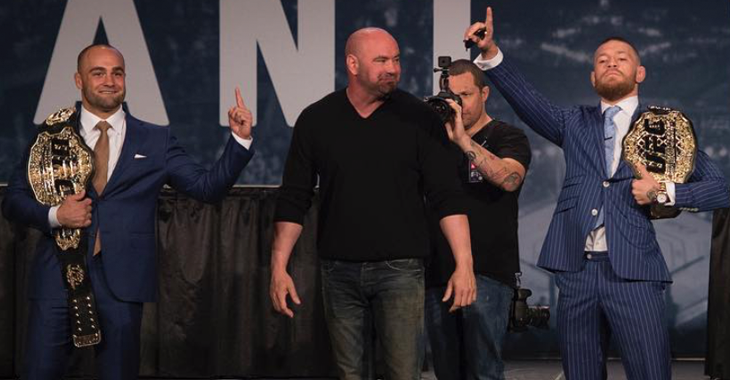 UFC 205 takes place as Conor McGregor looks to stamp his name in the history books yet again. “The Notorious” will get his chance to become the first fighter in UFC history to be the champion of two UFC divisions simultaneously.

On the opposite corner of the Octagon, McGregor’s opponent, UFC lightweight champion Eddie Alvarez has his chance to raise his stock through the roof in his first UFC lightweight title defense.

Alvarez spoke on The Countdown with Michael Bisping about the superfight against the UFC’s biggest draw in Conor McGregor.

“Mark Henry has been game planning for Conor for a little bit, because he thought Frankie Edgar was going to go after him,” Alvarez stated (transcribed by Jim Edwards of FloCombat). “Before we even had the fight Mark Henry had the game plan, so we already knew what we wanted to do, what Conor was strong at, and what Conor was weak at. The good thing is he just recently fought and you can’t change much in that amount of time.

“We got a good scanner report, a good game plan, and I think just stylistically it’s my fight to win. I won’t say it’s easy, especially against a guy who has the crowd like that on his side, but I’m going to get this job done and I’m going to get it done violently and quickly.”

Alvarez said that by picking his moments, he will expose a lot of holes that he sees in McGregor’s game. The lightweight champion also said that McGregor’s list of opponents have all been hand selected in his favor to win stylistically and that Conor has not faced an opponent like himself yet.

“Technically, I think Conor’s a good fighter,” Alvarez admitted. “He probably does a lot of drills so technically he’s sound, but for me, fighting after a certain point, technique doesn’t matter in a championship fight. It comes down to will, it comes down to spirit and your willingness to win the fight. I think that’s the main ingredient to what makes a champion and I think that’s what he’s missing. “I honestly feel that’s what he’s missing. He’s very technical, he’s a clean good fighter for a round, round and a half, but when you get deeper into a fight we’ve all seen him in moments of adversity and it doesn’t look good to me–it doesn’t look like championship caliber. It doesn’t look like someone who’s willing to take a beating and get on that stool and come back out and give it back to the guy.”

With training with “the best southpaws in Philadelphia” and sparring with professional boxers such as Bernard Hopkins, will Eddie Alvarez ruin Christmas for all Conor McGregor fans in the month of November? Sound of in the comment section!