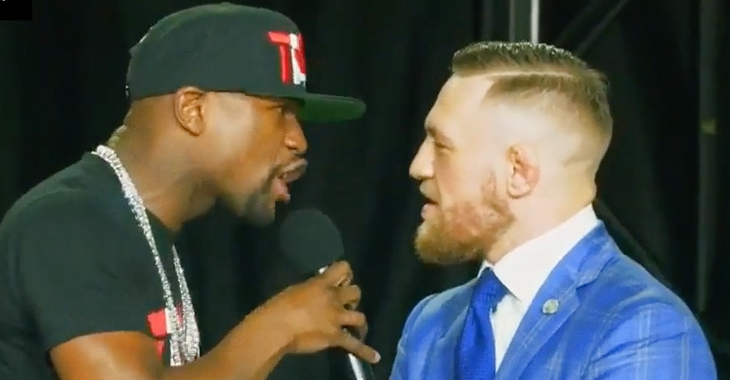 Former UFC lightweight champion Eddie Alvarez spend several months gearing up for his highly anticipated UFC 205 scrap with Conor McGregor in 2016. Throughout the course of several press conferences leading up to the fight, Conor McGregor and Alvarez traded scathing verbal blows. When the pair stepped into the Octagon together, it was McGregor who dominated the fight, dropping Alvarez several times en route to a 2nd round TKO win to win the UFC lightweight title.

Given Alvarez’ experience in combat sports, in addition to his experience sharing the Octagon with McGregor, he recently spoke on ESPN’s 5ive Rounds podcast to discuss the Mayweather-McGregor world tour, as well as McGregor’s chances in his upcoming boxing match against Floyd Mayweather. He spoke about the world tour, saying:

“I was sitting back with some popcorn, really enjoying this tour they went through. The most comical thing for me, even when I watch movies, is the guy who’s so crazy confident about himself, like with the mink jacket. To me, that is so funny. I wish I could be like that. As a fighter, I wish I could do that, so I could make people laugh. But I can’t. It’s not my style. I’m glad he does it because we need that. We need guys like that.”

In regards to his thoughts on the NcGregor Mayweather fight, Alvarez stated:

“Conor has about three or four rounds to get this done. . . Within those four rounds, if you don’t think Conor can knock this guy out, you’re an idiot or you just don’t know fighting because it can very well happen. If he doesn’t get it done by then, then it could look very one-sided. The technical boxing of Floyd Mayweather is enough to make it look really one-sided for him. But Conor, there is a very real chance that he can put him away.”