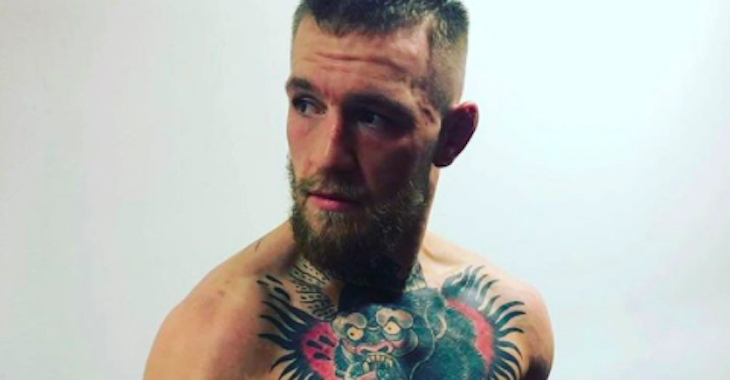 Prior to a Conor McGregor vs. Floyd Mayweather boxing match, two-time boxing champion Paul Malignaggi made headlines as he and Conor McGregor were involved in a bitter war of words.

After the Mayweather-McGregor fight was finalized, Malignaggi revealed via MMAFighting that he had actually been called upon to help McGregor prepare for the fight with Mayweather:

“I did get called to go to camp with Conor McGregor. I was surprised [since] I haven’t really been training, I haven’t been in the gym, so I started working out a little bit. I’m working out the details to spar with McGregor. If it’s something that’s going to be feasible, I think it’ll be cool because I think I’ll have some inside stuff to talk about on fight night.”

Now, a photo has emerged from McGregor’s training camp of himself sparring with Malignaggi ahead of the fight:

They say I've got no hands.

Immediately, speculation began pouring out as to whether or not it was Malignaggi, however shortly after the photo was posted to McGregor’s Instagram, Malignaggi took to Twitter to reveal that he was indeed helping McGregor prepare for the fight:

Good rounds last night with @TheNotoriousMMA. My code is sparring details stay in the gym. Look forward to helping him get ready for 8/26.

While the general consensus amongst the combat sports community is that McGregor’s best chance of defeating Mayweather in the fight is in the early rounds when he is fresh. With the addition of a two-time champion such as Malignaggi to his camp, how big of an impact do you think this will make on McGregor’s chances of winning the fight on August 26th?