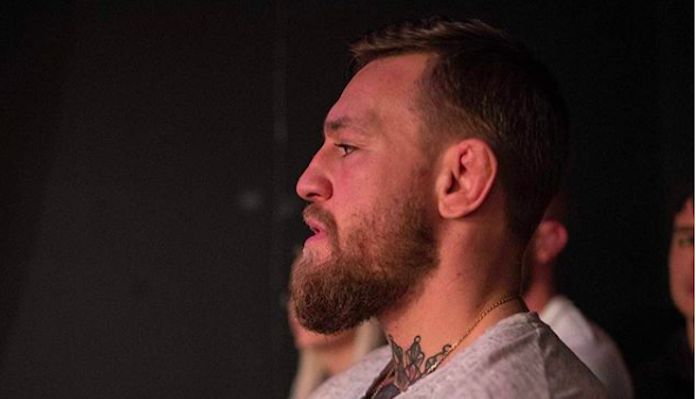 UFC 223, which goes down April 7 in Brooklyn, NY, will be headlined by one of the biggest lightweight fights ever, as interim champ Tony Ferguson collides with undefeated contender Khabib Nurmagomedov. That is, unless disaster strikes, and one of the two men is forced out of the fight. This is what’s happened every single time the two lightweight stars have been scheduled to fight previously, and we’re all counting down the days to UFC 223, praying that it doesn’t happen again…

If disaster does strike, and one fighter is forced out of the UFC 223 main event, it seems possible that Conor McGregor will attempt to step in and replace them. Whether the UFC and New York Athletic Commission would allow such a thing is difficult to say, but the Irish star is apparently keen to “stay ready,” and also seems to be working hard on his wrestling. Given the insane wrestling pedigree of both Nurmagomedov and Ferguson, this is definitely interesting…

Be ready stay on the line

“Stay on the line,” Nurmagomedov replied to him.

Of course, this is all just speculation. It’s possible that McGregor is just staying in shape in anticipation of his next fight. Even if it’s as simple as that, though, it’s nice to see he’s in the gym, rather than partying on yachts, or whatever it is he does for fun these days. If he’s in the gym, we can assume he’s almost ready to return to the cage, which is definitely what the sport of MMA needs right now. Whatever the case, it’s safe to say that Nurmagomedov and Ferguson’s looming clash has gotten Conor McGregor’s attention in a way that few other recent UFC fight have.

Do you think we’ll see Conor McGregor back in the cage soon?