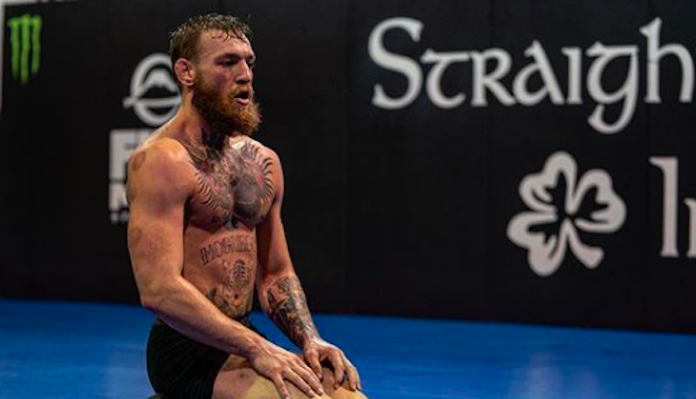 Conor McGregor‘s MMA journey began in March 2008 and since then he has gone on to become the biggest star in the sport’s history.

Having not fought since November 2016 when he won his second UFC title by defeating the then lightweight champion Eddie Alvarez, McGregor is now set to make his long-awaited return this Saturday at UFC 229. Standing across from him will be the current champion, Khabib Nurmagomedov.

Prior to McGregor’s lightweight title win, he had won the featherweight crown thus resulting in him officially being the first champion to ever hold two divisional titles simultaneously. However, it wouldn’t last as he wasn’t expected to end up going back down to featherweight after the lightweight title win which led to his stripping of the belt.

Eventually, the same thing would happen to his lightweight title as he’s been inactive for as long as he has now. McGregor recently explained to TheMacLife that because of these things, it affected his feelings towards the sport.

“I don’t owe nobody an answer for nothin’. I’m here for the love of this game. For the love of competition. I fell out of love with the game for a bit. Went off and did my own thing, had many things goin’ on. Now I’m back. I’m hungry to compete.

I spent my entire life’s work to win those two world titles, the two UFC world titles. I set out a goal. I put everything, absolutely everything, sacrificed so much to gain those world titles, and then as soon as I win the second world title I hadn’t even been offered a featherweight contest and the featherweight title was taken off of me and handed back to a man I had a crazy history with. I traveled the world with, two year build up, he ended up pulling out — blah, blah, blah — when I ended up fighting him I knocked him out inside 13 seconds, and then they give him the belt back as soon as I walked outside the Octagon in Madison Square Garden.

And then, what? A month or two, the lightweight belt was stripped off me also. These things irritated me, especially seeing what way it’s going, who the belts are given to, who the people who are challenging for the belts, who the person who has the belt is facing to get the belt. Many things irritated me in the game, and then watching the whole thing unfold, I just became much more hungry to come back and show who the real king is.”

Despite his inactivity in regards to MMA, McGregor continued on to state that the itch to compete returned a couple months ago as he attempted to step in for short notice bouts on two separate occasions.

The first being the UFC 222 headliner that was initially scheduled to be Frankie Edgar challenging featherweight champion Max Holloway. Holloway would suffer an injury that forced him out of the bout.

The other being the eventual UFC 225 interim welterweight title bout between Rafael Dos Anjos and Colby Covington which was originally planned for UFC 224 in Brazil.

“They (UFC) refused me because they anticipated that it would have cost them too much money to have me show up with too little time to promote. However, I was willing to take a pay cut. I am not in this for the money. I mean of course I’m not going to fight for less than my worth, but in those instances, I would have, I just wanted to compete. Frankie was supposed to fight Max, and I have a history with Frankie, linked many times so I thought it was going to be a perfect opportunity. They turned it down assuming it was going to cost too much, I would have been willing to take a pay cut.

Then the Dos Anjos fight later on…there was an interim belt in Rio de Janeiro, May 5. I reached out again, I will take this contest, and let’s not let the same error happen in the Frankie contest. Let’s discuss. I’m not here for the money, I wanted to compete those times, I missed the game back then. That didn’t happen.”

In the end, McGregor will be getting to scratch that itch once again as fight week is upon us. And barring any wild and catastrophic incidents that would prevent the fight from happening, in this case, for Nurmagomedov, McGregor will have two potential replacement opponents ready to go as the co-main event will feature Tony Ferguson vs Anthony Pettis.