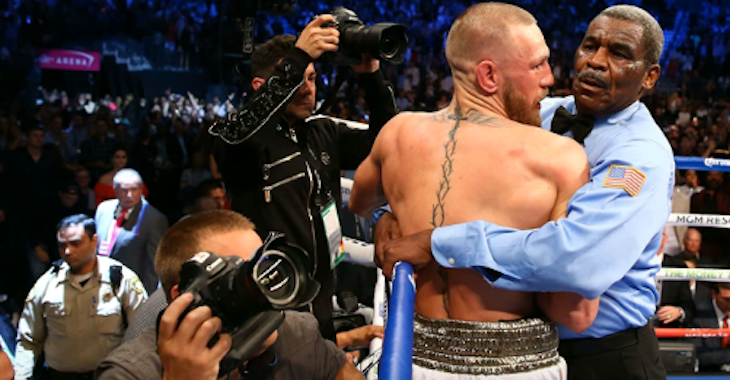 However, after having some time to review the fight footage, “Mystic Mac” has decided to change his tune on the subject.

In a recent interview with Caroline Pearce in Glasgow, the UFC lightweight champion went off on Robert Byrd for how he handled his staredown and also accused the referee for trying to wrestle him off Mayweather during their blockbuster fight.

“When we came face to face and we were doing the rules thing, he was only staring at me,” McGregor said. “I’m looking at him staring at me and I could see in my peripheral vision that he was looking at me and not looking at Floyd. I was going to say, ‘He’s fighting as well, mate. Give him the f**king rules. I don’t know. What was going on there?”

“Every time we tied (up) he literally wrestled me off of him. It is what it is, I knew I wasn’t going to get a fair shake out there.”

After putting together an excellent opening four rounds against “Money”, McGregor would eventually tire which allowed Mayweather to storm back and eventually earn a tenth-round TKO victory.

The brash Irish superstar, McGregor, discussed the “early stoppage” in his bout with Mayweather during his interview with Pearce in Scotland.

What do you think of these comments from Conor McGregor? Do you think his fight with Mayweather was stopped to early? Sound off PENN Nation!