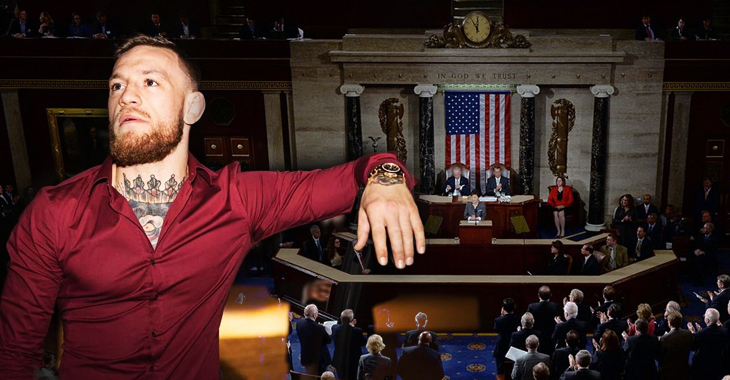 Right after Conor McGregor hoisted two UFC titles above his head at UFC 205, he put on one of his signature suits and strolled to the post-fight press conference. It was there, celebration whiskey probably still on his breath, that he vowed he was coming back for a piece of the whole company.

In the meantime, he ventured outside of the Octagon (while still under contract with the UFC) to have a multi-million dollar boxing match with Floyd Mayweather. A fight that reportedly put $30 million in McGregor’s pocket. This was 10 times the amount McGregor made in the UFC, which was still the highest for a single bout. However, his next fight could be with congress itself, using his powers of influence to change the sport for the better.

“We have been told by his team that [Conor McGregor] was going to come to the [Capitol] Hill to talk about this,” Congressman Markwayne Mullin, a Republican from Oklahoma, told Reuters in an interview.

What Conor McGregor would speaking up about, is extending the legal protection that boxers possess to cover mixed-martial-artists as well. An extension of the Muhammad Ali Boxing Reform Act is something that has been batted around for many years, but never gained any proper footing. It would mainly cover the fighter’s status as true independent contractors, their own safety as athletes, and implement an independent rankings system to ensure that those who are worthy based on performance get a title shot.

“While the UFC treats all of its fighters as “independent contractors” rather than employees, they are not free to fight for other promotions.

Nor can they undertake certain commercial activities related to their fighting careers without the UFC’s permission, a situation many critics say is too restrictive in what can be a short and very tough career.

McGregor, for example, still had to get the go-ahead from the UFC and agree to share revenue with the body before signing to fight Mayweather in one of the richest boxing bouts of all time.

MMA fighters often complain that their UFC contracts limit their earnings, pointing to the exclusive outfitting deal with Reebok, which prevents them from wearing equipment from any other manufacturer when fighting.”

According to UFC’s chief operating officer Lawrence Epstein, the UFC is already ‘exceeding the requirements’ when it comes to safety and also argues that independent rankings system would inhibit their ability to put on the biggest fights possible. Whether McGregor speaks up about this or not, it’s certain that it would take a highly influential person to be the catalyst for any change whatsoever. Who better though, than the only UFC fighter to co-promote a gigantic boxing match with the organization?

“We have been successful for one reason and one reason only – we put on the fights the fans want to see. That’s where we have a problem with what Congressman Mullin wants to do.” – Lawrence Epstein speaking to Reuters.