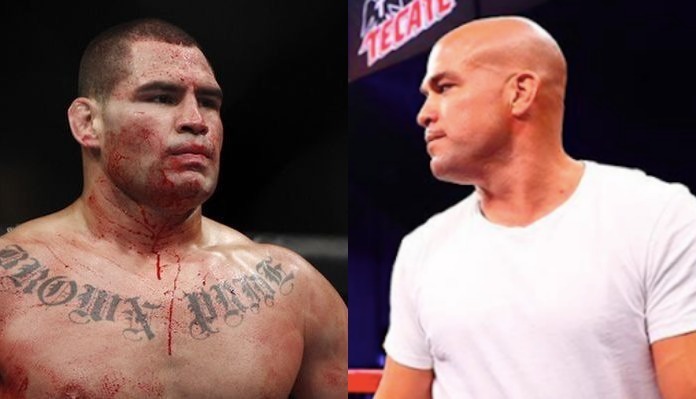 Speaking to Shakiel Mahjouri of Bloody Elbow ahead of this fight, Ortiz divulged that he has signed a three-fight deal with Combate Americas, and that their are likely more big fights coming for him.

In fact, Ortiz says Combate Americas CEO Campbell MacLaren has been in touch with former UFC heavyweight champion Cain Velasquez, who is allegedly interesting in fighting the winner of his fight with El Patron.

“It’s not a one and done deal with Combate. I signed a three-fight, two-year contract with them. So there will be a fight after,” Ortiz said (via MMA News). “Campbell [McLaren] actually talked to Cain Velasquez and he said he’d like the winner of this. If Cain Velasquez can get to 205, I’m in. If he can make it to 210 I’m in.”

While Cain Velasquez is regarded as one of the best heavyweights of all time, he’s certainly not big for the division. The former UFC champ typically competed around the 240-pound mark, and has previously teased a drop to light heavyweight.

That being said, he recently made his debut in the WWE ring, and seems to be content to focus on pro wrestling at the time being, so a potential fight with Ortiz or El Patron seems extremely unlikely.

Tito Ortiz will enter his Combate Americas fight with Alberto El Patron on a two-fight win-streak. In his last fight, he authored a brutal, first-round knockout of his arch rival Chuck Liddell.

El Patron, who is best known as a pro wrestler, has competed in MMA a surprising 14 times, tallying a 9-5 record. His last fight occurred all the way back in 2010, when he was stopped by Yamamoto Hanshi. This loss derailed a six-fight win-streak.

Do you think we could see Cain Velasquez fighting Ortiz or El Patron in the future?