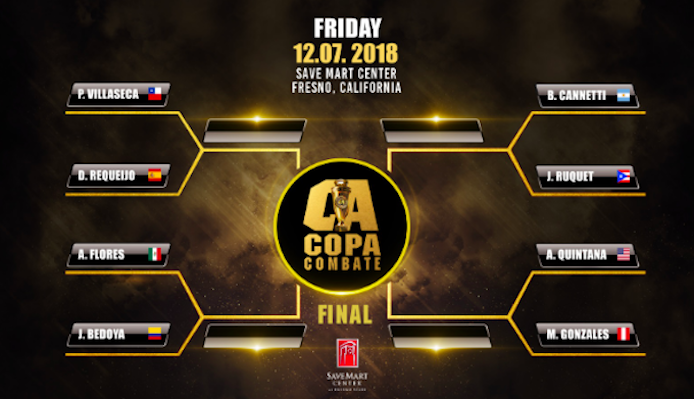 Yesterday, Combate Americas announced two changes to the lineup for its much-anticipated, biggest event of the year – the “COPA COMBATE” one-night, eight-man, $100,000 grand prize Mixed Martial Arts featherweight (145 pounds) showdown – as well as the tournament brackets for the event that takes place at Save Mart Center on Friday, Dec. 7.

Originally slated for action in a previously announced tournament alternate bout, 26-year-old Joey “El Cazador” Ruquet (6-1), fighting out of Las Vegas, Nevada, USA and representing Puerto Rico, has been entered into the main draw of the eight-man tournament where he will replace Uruguay’s Gaston “Tonga” Reyno (7-2, 2 NC), who has been forced to withdraw from the tournament due to staph infection.

In addition, Daniel “El Gallego” Requeijo (14-6) will represent Spain in place of previously announced Zebenzui “El Niño Roca” Ruiz (7-2), after Ruiz was unable to secure a visa to enter the U.S.

The 34-year-old Requeijo, who hails from Spain’s Las Palmas, Canary Islands, boasts a near-93 percent finish rate, earning 13 of his 14 career victories by way of (T)KO or submission.

On one side of the draw, or “Group A,” Requeijo will square off with Pablo “El Gallo” Villaseca (13-4) of Santiago, Chile, while Alejandro “Gallito” Flores (13-1) of Monterrey, Nuevo Leon, Mexico will battle undefeated John “Ronin” Bedoya (6-0) of Bogota, Colombia.

On the other side of the draw, or “Group B,” Ruquet will collide with Bruno “Aquiles” Cannetti (7-5) of Buenos Aires, Argentina, while Andres “The Bullet” Quintana (15-2) of Roswell, N.M., USA will face fellow prolific star Marlon “Deriko Siete” Gonzales (13-3-2, 1 NC) of Lima, Peru.

Announced today as an addition to the “COPA COMBATE” event preliminary bout card was a flyweight (125 pounds) tilt between Paul Elizondo (1-0) of Fresno and Nathan Napolitano (0-0) of Salinas, Calif. USA.

Priced from $30, tickets for “COPA COMBATE” are on sale online at CombateAmericas.com/Tickets and at Ticketmaster.com, as well as at the Save Mart Center box office. Doors at Save Mart Center will open for the event at 5 p.m. PT on December 7, and the first preliminary bout will begin at 6 p.m.