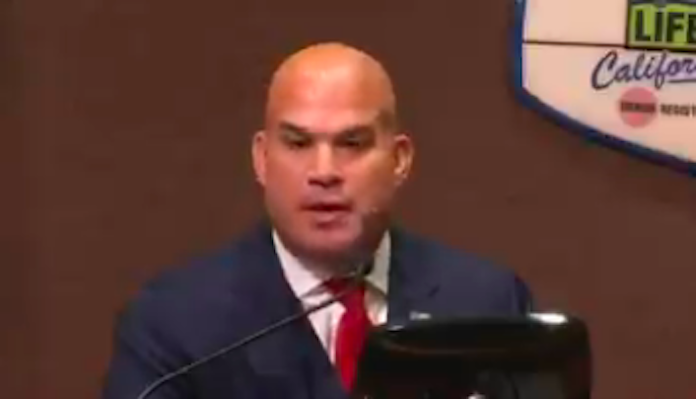 Former UFC light heavyweight champion Tito Ortiz is now a member of the Huntington Beach City Council, and he’s already receiving some hate in the role.

This week, Ortiz attended his first City Council Meeting, where he was sworn in for the role—and also roasted by a citizen who called in to voice his disappointment with some of the former fighter’s recent remarks.

Ortiz, who is very active on social media, is a brazen supporter of many conspiracy theories, particularly with respect to the ongoing COVID-19 pandemic, which has killed almost 300,000 people in the United States alone. He’s also opposed to mask mandates as a method of limiting the spread of the virus.

Those opinions did not go well with one Huntington Beach citizen, who called into the meeting to scold Ortiz for his scurrilous comments on the subject

A Huntington Beach resident calls in and roasts Tito. pic.twitter.com/o4FVTvPIGP

“I also think it’s important to inform the people and make sure that you are being a good example,” the caller said, targeting Ortiz. “I do not think it is appropriate, for example, to claim that COVID is a form of population control or to cite a news article claiming that masks don’t work, which is based on a Danish study which says on its first page—and I quote—that it has ‘inconclusive evidence results, missing data, variable adherence, patient-reported findings on home tests, no blinding, and no assessment on whether masks can decrease the transmission from mask-wearers to others.’ That’s on the first page of a study that an incoming city council member cited on their Instagram page.

“Most of all, I think it’s important to respect the people that work for us in our city,” the citizen continued, adding to his criticisms of Ortiz, who was not wearing a mask at the meeting. “I don’t think it’s respectful to say that ventilators cause COVID or to imply guilt on the part of our doctors and medical professionals. I also do not think it is respectful to not have the police wearing masks in crowded environments. It doesn’t cost that much to wear masks and I think it’s the bare minimum of respect to wear one when you’re in a large crowd of people downtown.”

Unfortunately for this caller, the ever-bullish Ortiz is unlikely to be deterred. After being sworn in at this Huntington Beach City Council Meeting, Ortiz referred to the pandemic as a “plandemic.”

In his first public comments as Huntington Beach Mayor Pro Tem, Tito thanks the Huntington Beach residents that gave him “an opportunity to speak in front of large groups.” Then he makes a COVID-19 “plandemic” reference. pic.twitter.com/Z3hxjXpbSW

Do you think Tito Ortiz is cut out for the world of municipal politics?