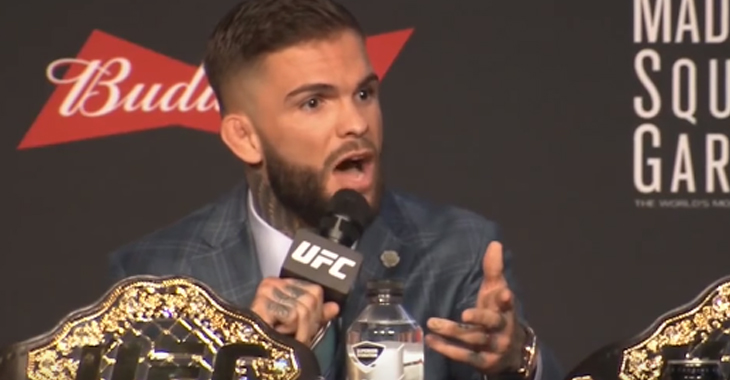 The UFC had one last press conference today to promote the year’s biggest card so far. With the cast of characters contained in the triple-title fights at UFC 217 gathered together three days from bell time, it was bound to get heated even before the staredowns. Cody Garbrandt has not been shy about saying all sorts of wild things about his opponent TJ Dillashaw throughout the build up, but something he said today at the presser made a lot of people pause.

Did Cody say TJ showed everybody how to do it (PEDs) on Alpha Male? Isnt he basically saying TAM uses PEDs then? pic.twitter.com/oAoJkLK1I6

So now I’m a drug lord? And all of TAM admits to being on steroids! Codys not the sharpest tool in the shed, but definitely a tool! https://t.co/3LH2D9sRcX

Garbrandt: You’re the one who showed everyone how to do it on Team Alpha Male.

Steroids accusations have already been thrown out during the long rivalry between TJ Dillashaw and Cody Garbrandt, but this takes it to a whole new level. The allegation is that the former teammate instructed team members on how to cheat and not get caught. Did he just misspeak, or did Garbrandt just open a can of worms regarding the team (in which he is still a member of) and a history of doping? A comment Garbrandt meant to insult Dillashaw has now backfired on him.

Obviously, TJ Dillashaw was quick to respond to all this after the fact and seemed just as confused as all of us. The plot thickens just as we’re mere days away from their bad-blood drenched encounter. At this point, it seems unlikely that this rivalry will be put to rest no matter who wins on Saturday.