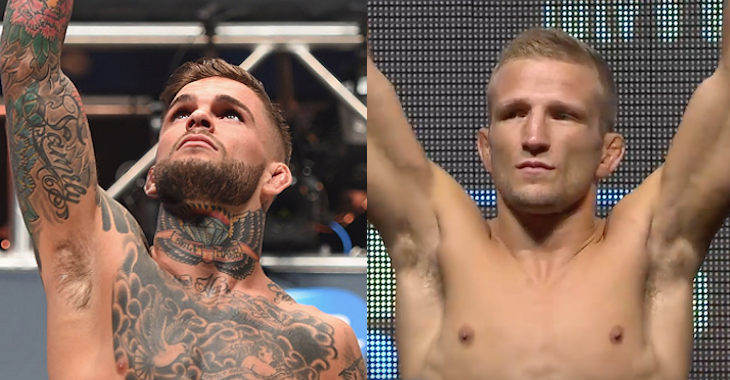 Interestingly enough, former bantamweight kingpin Dominick Cruz, who has fought both men, believes that Garbrandt will win the fight. During a recent appearance on The MMA Hour, Dominick Cruz elaborated on how Dillashaw’s style makes him a good matchup for his former teammate, but why it won’t be enough: “I think stylistically, TJ has the technique and the tools to beat a guy like Cody,” Cruz said on Monday’s edition of The MMA Hour (via MMA Fighting). “He kicks fluently, he mixes his punches and kicks. Cody has the edge in the power in the pocket, but TJ can make up the pocket work with kicks, movement, and angles, and he’s kicking a little bit more than I did against Cody, so I think that will play to his advantage.” As Cruz pointed out, he believes the mental strain of Dillashaw frequently engaging with his former teammates on The Ultimate Fighter will likely wear on the former champ. That engagement with his former teammates even resulted in a shouting match between Dillashaw and Faber on the first episode of The Ultimate Fighter, their first public spat since Dillashaw’s very public departure from Team Alpha Male.