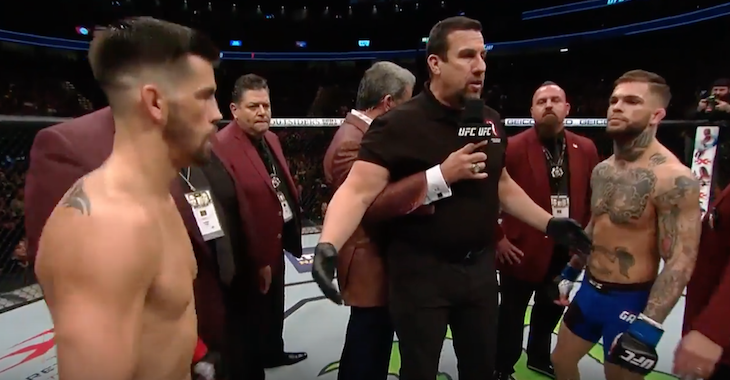 Late last year, undefeated Team Alpha Male contender Cody Garbrandt stepped onto the canvas with dominant bantamweight champion Dominick Cruz. In advance of this fight, there were widespread claims that Garbrandt hadn’t yet earned his title shot, but in the end, he silenced his doubters by walloping Cruz to a sound, unanimous decision win.

During a recent media day for The Ultimate Fighter 25, which will see Garbrandt and Dillashaw compete as opposing coaches, Garbrandt discussed his choice to offer Cruz an immediate rematch. His words (via MMAFighting.com):

“I was very surprised with Dominick, all the sh*t talking he did. What he said he was gonna do to me, he wasn’t able to do that, so I was just waiting for him to get the rematch. Give him the rematch, give him the respect for being the most dominant bantamweight fighter in the world. If I talked a lot of sh*t and a kid comes and beats me up like that, I’d at least try again, because I have a fighter heart.”

Garbrandt than elaborated that he believes Cruz didn’t accept his rematch invitation because he lacks a fighter’s heart.

“I feel like Dominick doesn’t [have a fighter’s heart]. I think I broke Dominick in that fight and truly don’t think Dominick will be the same.”

While Garbrandt didn’t get the Cruz rematch he was initially interested in, however, he assured that he’s happy to be fighting Dillashaw, who is his former teammate.

Do you think Dominick Cruz can bounce back from his loss to Cody Garbrandt? Sound off, PENN Nation!