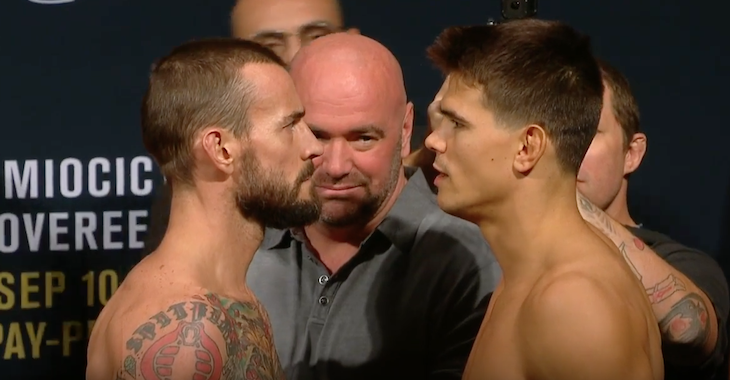 Earlier this month in Cleveland Ohio, former WWE champion CM Punk made his highly anticipated UFC debut on the main card of UFC 203. The fight, which took place nearly 2 years after Punk was signed to the UFC, was an extremely short one that saw Gall dominate the fight from bell to bell.

Following the fight, the MMA community appeared to be torn on the matter. While some praised Punk for having the guts to step into the Octagon at 37 years old without having any MMA experience, others criticized the Chicago native, as well as the UFC, for the situation. UFC middleweight champion Michael Bisping, who is currently gearing up for his UFC 204 title defense against Dan Henderson in Manchester, England, took to Champions.co to weigh-in on the situation:

I’ve got to say, I respect CM Punk. I respect anyone that’s got the balls to step in there and fight, especially with everybody wanting him to lose. Every fighter in the sport wanted him to lose, they really did.

He was in a terrible position, under immense pressure, and unfortunately for him, my fears about how the fight would likely go were correct. That’s an incredibly hard place to start your MMA career; in the UFC, on the main card of a PPV…that’s a tough ask for anybody.

Mickey Gall was the better fighter, and now it’s back to the drawing board for CM Punk. Unfortunately, the reality of the situation is that we might never get to see him back in the Octagon.

In the wake of the fight, there has been some talk of Punk potentially getting one more fight in the Octagon. While UFC President Dana White initially shot the idea down, saying if Punk wants another MMA fight it shouldn’t be with the UFC, it now appears as though there is a slight chance Punk once again fights in the Octagon.