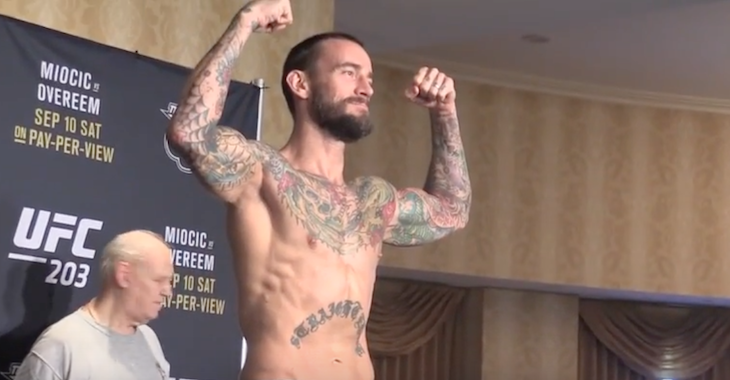 Former WWE champion CM Punk made his mixed martial arts debut at this Saturday’s UFC 203 pay-per-view event in Cleveland, where he suffered a first-round submission loss to prospect Mikey Gall.

The fight turned out to be quite lopsided, as Gall was able to score an early takedown and promptly dominate Punk on the canvas with solid ground and pound before sinking a fight-ending rear-naked choke submission.

Punk, who labelled a huge underdog going in to the bout, is unsure if he will get another shot in the UFC but he is prepared to continue a career in fighting as he stated at the UFC 203 post-fight press conference (as transcribed by MMAFighting):

“My initial venture into this was gonna be at the lowest level,” Punk said. “This opportunity just got presented to myself and I would have been a fool to say no. I don’t know what happens from here on out. What if I get cut? I don’t know. I think that’s a possibility. Do I want that to happen? No. But who’s to say where I go from here? I don’t know. I definitely want to keep going.”

“There’s probably an alternate reality somewhere where I win and I’m still disappointed in myself,” Punk stated. “That’s just who I am. I’m just really, really hard on myself. I lost and it sucks and it was lopsided and it’s upsetting. But I know I’m better than that.”

Regardless of the final outcome, CM Punk says he is glad he made the walk in to the UFC’s octagon:

Do you think the UFC will give CM Punk a second fight? Sound off PENN Nation!