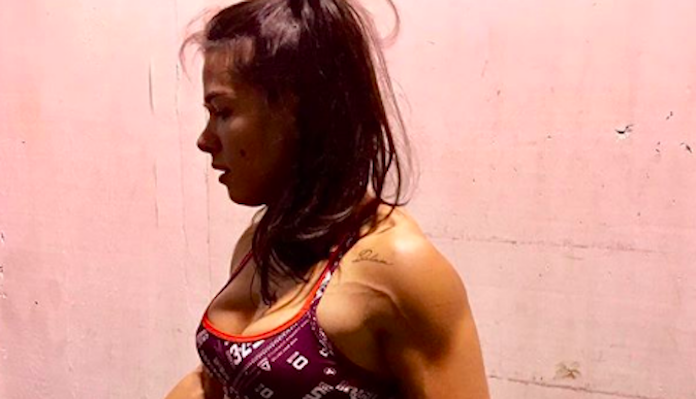 Last weekend, on the undercard of the stacked UFC 225, former strawweight champion Carla Esparza gave up a close decision to perennial strawweight contender Claudia Gadelha. Shortly thereafter, she accused Gadelha of cheating, sharing her belief that the Brazilian was greasing on Monday’s edition of The MMA Hour.

“She cheated in the fight; she greased before the fight,” Esparza said. “I was considering saying something to the referee in between [rounds]. I was going to say, ‘She’s greasing! She’s greasing,’ but I didn’t really know how to go about it. … Even when I was trying to grab armbars during the fight my arms kept slipping down. She’s a cheater, but it doesn’t really surprise me. In my opinion, she’s been a pretty dirty fighter throughout, so it is what it is.”

Claudia Gadelha has now responded to these rather damning accusations. In her opinion, Esparza is only making excuses for her loss.

”I think Carla is trying to find excuses for what happened,” Gadelha told MMA Fighting. “I badly injured my knee, everyone at the UFC [Performance] Institute knows that because I was treated by the institute’s physiotherapist. [The physiotherapist] was the only reason I didn’t pull out of the fight. She said ‘I’ll take care of you.’ I kept visiting the physiotherapist during fight week to be able to fight. I felt the knee in the first round, could barely stand, and still beat Carla in her game, wrestling, so I think she’s just mad she couldn’t outwrestle me. She was supposed to be a high-level wrestler and that’s how she lost to me.

”There’s an athletic commission with officials following you the moment you enter the arena up until the point you enter the Octagon, including inside the Octagon, checking if there’s something on your body. Come on, we’re in 2018, this greasing story is from Vale Tudo days, don’t know how many years ago. At this level, today, I don’t think it happens anymore.

Interestingly, Claudia Gadelha is not the only UFC 225 to be accused of greasing. New UFC interim welterweight champion Colby Covington accused his foe Rafael dos Anjos of doing the same.