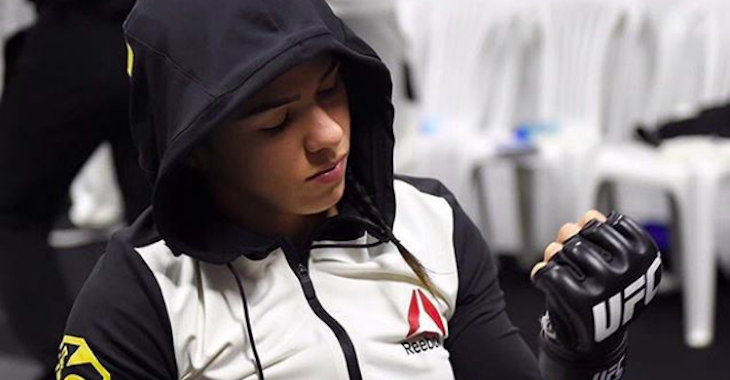 Claudia Gadelha entered tonight’s contest with a 15-3 record while her opponent Carla Esparza sported a record of 13-4 overall.

Round one begins and Carla fires off a low kick as Claudia comes forward. Carla with a left hand and then a leg kick. Gadelha moves in and wings a right hand. Carla fires right back with a left. Claudia with some pressure now. She lands an overhand right that appears to stun Carla. Esparza shoots for a takedown but cannot get it. Carla gets up and fires off a low kick. Claudia continues to use a lot of pressure. She fires off a right hand. Carla retreats but Claudia is all over her. Carla lands a big punch that rocks Claudia. Now it is Gadelha on the retreat. Carla with a punch followed by a takedown. She begins to work some ground and pound but Claudia scrambles and is able to lock up a knee bar. Carla escapes the submission attempt but winds up on the bottom. The fighters jockey for position. Claudia is able to grab a hold of Carla’s neck and drops for a guillotine. This choke is tight but the horn sounds to end round one.

Round two begins and Carla comes forward and throws right hand. Claudia avoids the strike but Carla stays on her with pressure. Esparza presses Gadelha against the cage and begins to work some knees. She is looking to tire Carla out this round. Claudia eventually breaks free and then shoots in and scores a takedown. She immediately moves to side control. There is a scramble. Claudia remains on top but is now in half guard. She begins working in some hard right hands. Carla is able to get back to half guard but the ground and pound from Gadelha continues. Carla eventually scrambles and gets back to her feet. That doesn’t last long though as Claudia uses a body lock to drag her right back to the canvas. Claudia with some left hands. The horn sounds to end round two.

Round three begins and Carla is able to land another big punch early. That might have stunned Claudia who backs up. Carla with a right hand attempt but Claudia counters with one of her own. That was a big punch. Claudia with a front kick now. Carla circles and then leaps in with a combination that lands. Another good punch from Carla. She is backing Claudia up now. Gadelha shoots in and scores a much needed takedown. She moves to half guard and begins working in some strikes. Esparza scrambles and gets back to her feet. She comes forward and then scores a takedown of her own. One minute remains. Carla with some ground and pound now. She is working from full guard. She outworks Claudia until the final horn and we go to the judges.