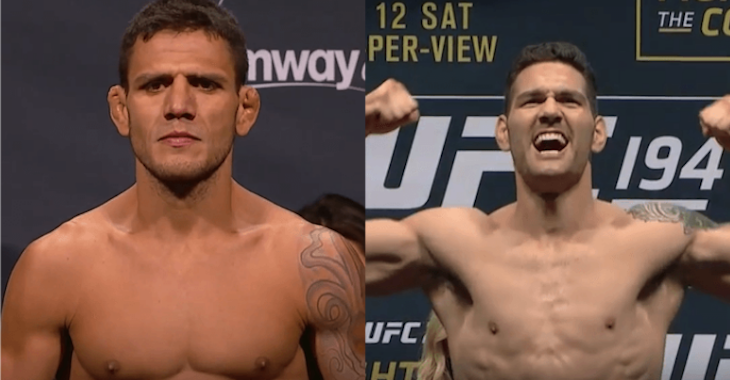 Today, big news surfaced regarding two former champions, both of which are targeted to return to the Octagon this summer if things go according to plan.

The first bit of news is that former UFC lightweight champion Rafael dos Anjos is targeted to return at UFC 212 in June, only this time at welterweight. Dos Anjos is being targeted to fight Tarec Saffiedine in his highly anticipated welterweight debut, which he announced following his second straight loss at lightweight, which came to Tony Ferguson after losing his lightweight title to Eddie Alvarez in the summer of 2016. His opponent, Tarec Saffiedine, will be looking to snap a 2-fight skid that saw him drop back to back decision losses to Rick Story and Dong Hyun Kim.

The second bit of news comes in the UFC’s middleweight division, and is contingent on Chris Weidman’s ability to defeat Gegard Mousasi at UFC 210 next weekend. Should Weidman emerge from UFC 210 victorious, and healthy, the UFC is looking to have the New York native headline the ‘UFC on FOX 25’ card in Long Island on July 22nd. Weidman of course would be looking to avenge his UFC 205 loss to Yoel Romero in New York, where the former champion was looking to get a win in front of his hometown crowd. This bit of news comes on the heels of news that a fight between Ricardo Lamas and The Korean Zombie was also in the works for the ‘UFC Fight Night: Long Island’ card on July 22nd. As our very own Chris Taylor’s Tweets below indicate, should Weidman defeat Gegard Mousasi at UFC 210 and be able to headline the Long Island event, Korean Zombie vs. Lamas would be demoted to the co-main event given the magnitude of having Weidman, a New York native, headline the card.

UPDATE: I was just told that if @ChrisWeidmanUFC wins at #UFC210 and is healthy, the hope is to have him main event UFC Long Island July 22

With that said, Lamas vs Zombie would be demoted to co-main