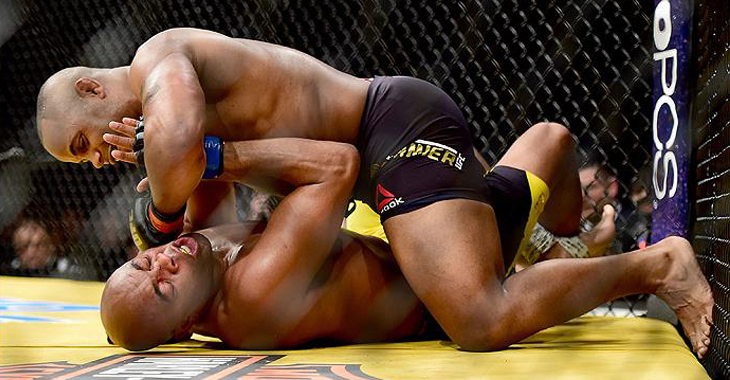 When Daniel Cormier defends his UFC light heavyweight belt against Anthony Johnson in their rematch at UFC 210 on April 8, it will be nine months since his last fight and nearly a year and a half since his last title defense.

Cormier’s last fight was a non-title fight against former UFC middleweight champion Anderson Silva, who stepped in on two days’ notice after Cormier’s original opponent, Jon Jones was pulled from their fight for testing positive for banned substances.

With the long layoff, the 38-year-old champion was asked by the media on the UFC 210 media conference call on Thursday if he feels he has lost any pep in his step as time and age play a huge part in this sport. “I have no idea what people are talking about,” Cormier said Thursday (as transcribed by Shaun Al-Shatti for MMA Fighting). “I fought Anderson Silva on two days’ notice (at UFC 200) and I beat a guy who people consider the greatest fighter of all-time, 30-26 across the board. There was no danger in that fight. That was the easiest fight of my entire career. I don’t know how I lost a step. If anything, I feel like I’m still able to get these takedowns whenever I choose to.”

With a decisive win over Silva, who many consider the greatest of all time, Cormier says that another win over Johnson will add a piece to his legacy. However, the champ is really looking to get a win over Jon Jones, the only man to have ever beaten Cormier in his professional mixed martial arts career. Cormier feels he needs to beat Jones to satisfy himself as well as the fans and pundits.

“I think beating ‘Rumble’ again, it’ll help. But ultimately, it will come down to my rivalry with Jones,” Cormier said. “Anthony has done a tremendous job as he’s come up in weight classes, but we’re talking about a rivalry with a guy who many consider the greatest fighter of all-time. So a win over a guy like Jon Jones is what’s going to really probably be the one thing that solidifies where I’m trying to sit whenever I retire from this sport.

“At the end of the day, I do have a tough challenge on my hands next week. Beating Anthony again, it’ll just be closing the chapter. People really do believe in him, and they really do love the knockout, so he gets reputation for being ‘the scariest guy.’ So beating someone like that twice really should cement who I am and everything else I’ve done. But ultimately, I think it will depend on the rivalry with Jones.”

Who are you predicting will get their hand raised in the UFC light heavyweight title fight between the champion Daniel Cormier and challenger Anthony Johnson? Sound off in the comment section!