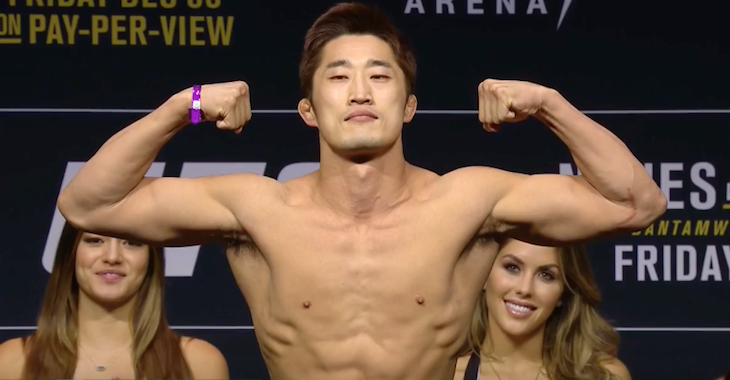 Round one begins and Kim quickly presses forward and misses with a wild left. The fighters clinch up and Saffiedine attempts to score a trip. It doesn’t work but he goes for it again and the second time is the charm. Kim bounces right back up to his feet but eats a knee from Tarec. Kim presses Saffiedine against the fence and works a knee. The fighters jockey for position and then break. Kim lands a nice right and then a left hand. Tarec retreats and Dong chases after him. Tarec lands a nice right hand and then circles out. Kim presses forward and the welterweights stand and trade. Tarec catches Kim with a right hand but Kim returns fire with a nice short left hook. The fighters briefly clinch and then break. Dong immediately presses forward and once again the clinch up. Kim presses Tarec against the cage and work for a takedown. Tarec defends and lands some nice knees inside. Saffiedine breaks free and lands a low kick. Kim eats it and presses forward. He gets a hold of Tarec and presses him against the cage. They break and Kim misses with a combination. Tarec scores with a pair of knees and then a trip takedown. Kim pops right back up to his feet and round one comes to an end.

Round two begins and Kim presses forward while pumping his jab early. He follows that up with a high kick that misses. The fighters clinch and Tarec lands a knee and then a low kick on the break. Saffiedine attempts a takedown but it is not there. Kim presses Saffiedine against the fence and works some short shots. Tarec pushes him off and circles out. Kim lands a pair of body kicks and chases after Saffiedine who is backing up. Kim gets a hold of him and presses him against the cage. He lands an elbow and then a punch before they break. Kim with constant pressure here. He chases Tarec down and once again presses him on the fence. He lands a knee an Tarec breaks free. Saffiedine circles to the center of the octagon and lands a kick. Kim eats it and continues to press forward. He clinches with Tarec and both men trade knees. They break and Kim lands a stiff right hand. Tarec replies with a hard kick but Kim walks through it and presses him against the cage. Kim works for a takedown but Tarec is doing a good job of defending. He switches the position but Kim lands a knee inside from the clinch. They break and Kim lands a body kick. The fighters miss with attempted punches to close out round two.

Round three begins and Kim lands a right hand to start. Both men begin trading punches. They are throwing wild now. Tarec lands a head kick but Kim eats it and continues to throw bombs. He charges forward and press Tarec against the cage. The fighters battle in the clinch and then break. Him lands a right hand and Tarec answers immediately with an elbow. They clinch and Kim presses Tarec back against the cage. He begins working for a single leg and this time he gets it. Tarec springs right back up to his feet however but Kim remains all over him. Two and a half minutes remain. They break and Tarec lands an elbow. Kim shoots right back in and searches for a single leg takedown. He gets it but “The Sponge” immediately pops back up. Tarec lands a kick and then another. He shoots in for a takedown but Kim switches the position and winds up on top. Tarec gets back to his feet and they begin battling in the clinch. Kim gets Tarec to the ground and winds up on top to close out round three.