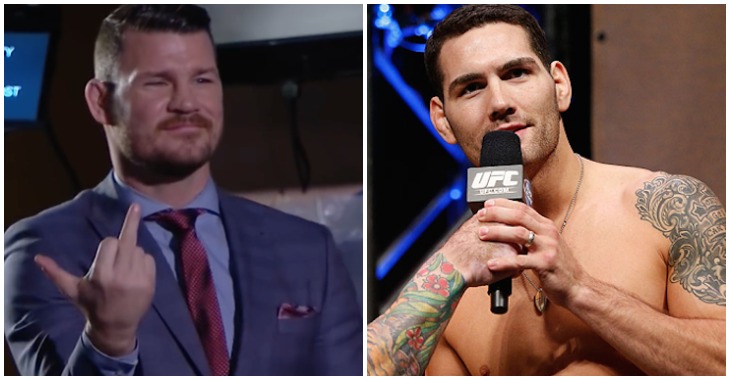 Last weekend, in the co-main event of UFC 210, Chris Weidman lost to Gegard Mousasi by second-round TKO. The circumstances of this TKO, however, were quite controversial.

It began with Mousasi landing what appeared to be two illegal knees. From there, the action was stopped, as a swarm of confused officials and referees milled about the Octagon trying to decide how to proceed, while a dazed Weidman attempted to regroup. Ultimately, the knees were deemed legal, and the fight was waved off by referee Dan Miragliotta, much to the outrage of Weidman and his camp. Hence the TKO win for Mousasi.

On a recent episode of his podcast, Believe You Me, UFC middleweight champ Michael Bisping gave his take on this controversial stoppage, and unsurprisingly, he had plenty to say about the way Weidman handled it.

“Weidman went in for yet another telegraphed takedown attempt, Mousasi kind of sprawled, kind of had him in a headlock position and from here, Chris tried to manipulate the rules,” Weidman said (via MMAFighting.com) If a person has one hand on the floor, in the past that was a downed opponent. What people used to do was, they used to touch the floor with that hand and then they couldn’t be kneed in the face, when realistically, they didn’t need to put that hand on the floor, they were totally manipulating the rules so they couldn’t be kneed.

“At a fight, you’re supposed to be a man and f**king fight, not manipulate the rules and put one hand on the ground or two hands on the ground. Be a man, stand up, fight, go out there, tooth and nail, bite down on your mouthpiece and lets f**king do this.”

Bisping then explained that, given all this, Chris Weidman has nobody but himself to blame for this latest loss.

“Chris Weidman has only got himself to blame for that fight being finished,” he said. “It appeared, initially, that it was two illegal strikes. So Weidman thought he had five minutes. But come on, man, talk about an Oscar-winning performance. He was laying it on thick. He thought he had five minutes but he was rolling around on the floor, clutching his head, [saying] ‘uhhhhhh.’ He was putting on a real performance here. He even rolled back from being on his knees on his backside.

“Because he was acting so hurt and so injured, the commission said, ‘no, you’re not continuing to fight,’ so they called it a TKO. I don’t know if that was the right decision, but Weidman was trying to win via a disqualification or, at the very most, trying to get a point deducted from Mousasi.”

“At the end of the day, when those knees were delivered — and they were legal knees, we know that with the benefit of slo-mo replay — Weidman put on a performance. He rolled around on the floor. He clutched his head like a six-year-old that bangs his head and wants a Band-Aid from his mommy! He was holding his head like a little kid! ‘Uhhh, mommy, mommy, I’ve hurt my head.’ And then he tumbles back onto his backside and he’s rolling around on the floor looking so sorry for himself.”

Bisping then recounted his 2016 bout with Anderson Silva, during which he absorbed a similarly controversial knee strike, and used this as an example of how the situation should have been handled by Weidman.

“I fought Anderson Silva,” Bisping said. “At the end of the third round, my mouthpiece came out, he dives up in the air, knees me in the face, opens stitches all over my face — I needed about 20 stitches in my face — I’m on the floor. As he kneed me, the buzzer went. Did I roll around on the floor going ‘mummy, mummy, please help.’ No! I got up, wiped the blood off my face, stuck my mouthpiece in, took a breath, had a sip of water, then went back out and fought. I didn’t roll around like a little b*tch on the floor hoping that the commission would give me a win by default. That’s what [Weidman] did!”

What do you think of Michael Bisping’s take on Chris Weidman’s UFC 210 loss?