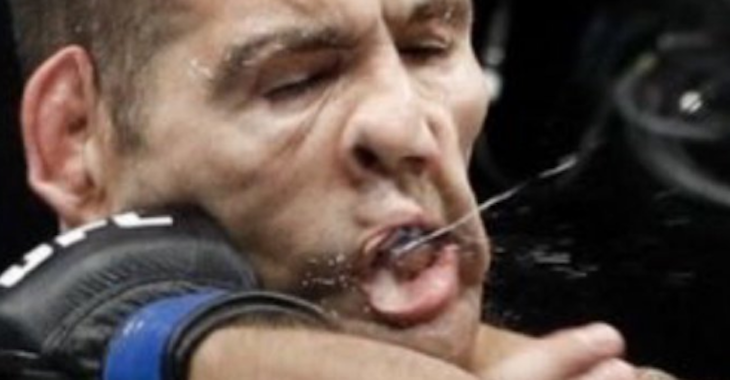 Last month, in the main event of the UFC’s debut in Long Island, New York, New York’s own Chris Weidman picked up an impressive submission win over surging middleweight contender Kelvin Gastelum. While Weidman managed to secure the win, however, he did not escape the fight unscathed. In the first round, the former champ was blasted by a crushing Gastelum punch – the impact of which happened to be brilliantly captured on camera by veteran combat sports photographer Esther Lin.

Ever the good sport, Weidman shared this image of himself getting punched in the face on Twitter after the fight. And though he didn’t expect such a reaction, the image became something of a viral sensation.

This fight game ain’t for everybody. But I love it! pic.twitter.com/9PZf4po6lX

On the latest episode of The MMA Hour, Weidman discussed this now well-known photo.

“I saw that picture, I was like, ‘wow.’ My face got put into like seven different directions at one time,” Weidman said (via MMAFighting). “So it was like a rippling effect going on, and I’m the ugliest human being ever in that picture, so I was like, ‘this is an interesting thing, I’ve got to put this up.’ I’ve got no shame. It’s part of the game, you’ve got to get punched sometimes.”

Weidman then explained that, while this punch was clearly a hard one, he was well prepared for Gastelum’s proven power.

“Look at his career, look at what he’s done to some really good fighters,” Weidman said of Gastelum. “Tim Kennedy is freaking really good, Vitor Belfort is really good. He stood up there and he KO’d these guys and knocked these guys out from his feet. He covers distance really well, he’s quick, he’s confident, he’s not afraid to get hit, he stays in the pocket, so no, I was prepared. I was prepared for all of that.”

What do you think of this photo of Chris Weidman getting punched?