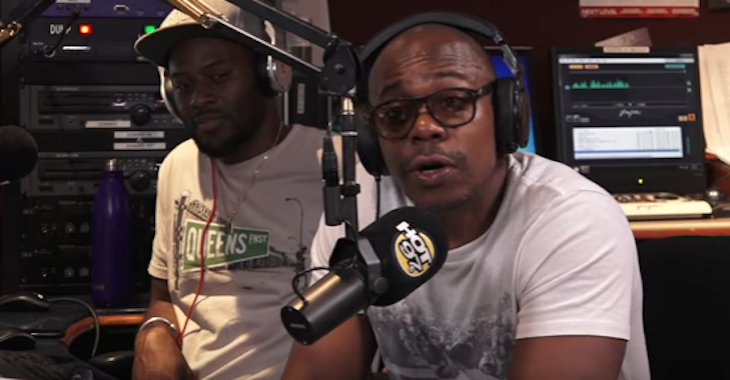 Big boxing matches have always been star-studded events. When the camera pans over the floor seats at any big fight, you’re bound to see dozens of actors, athletes, comedians and musicians taking in the action. The upcoming Conor McGregor vs. Floyd Mayweather superfight, which is widely considered one of the biggest fights ever, is no exception to that rule. The crowd is bound to be jam-packed with celebrities. You will not, however, see comedian Dave Chappelle taking in the madness.

Chapelle, who regularly attends big boxing matches, explained why he won’t be attending the fight on Hot 97.

“That fight, I might not attend,” he said. “Because it has all the suspense of a [Harlem] Globetrotters game.”

“It’s exciting, but I’m not going to go,” he continued. “I mean listen man, Floyd Mayweather is probably training as we speak. And as he’s training, do you know what Conor McGregor is doing? Learning how to box. He’s going to a fight a guy that was born with boxing gloves on, 10 oz. gloves. So it’s like, I just don’t see how McGregor can do it.”

“I will say about the McGregor-Mayweather fight that it’s such a spectacle that that in and of itself is worth seeing. I feel, no matter what happens, Conor McGregor’s a very big winner, and talked himself into a lot of money. It’s his first fight, and he gets to fight the very best. I just feel like that’s what the fight’s going to look like.”

Chapelle then commentated on the backlash McGregor received after he made comments that were widely perceived as racist during the May-Mac world tour.

“Honestly man, for what I do the, my ears are a lot less sensitive than most people’s, and in my heart of hearts I believe that these guys are great fighters.”

“I enjoy Floyd Mayweather, and I enjoy Conor McGregor,” he continued. “I don’t get bent out of shape about the things he says, because I know he’s getting ready to fight a guy, and I’m sure he has to feel deep in his heart that he’s going to whoop his ass.”

What do you think of these comments from Dave Chappelle?