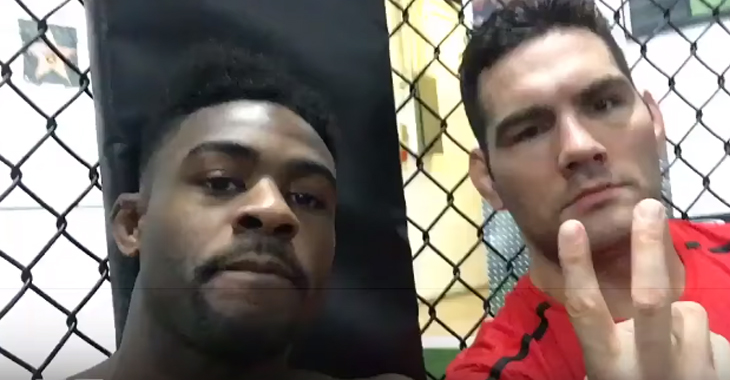 As much as MMA is always about bitter rivalries, with or without wolf tickets, it’s also about bromance. Think about all the iconic images this sport has given to us that celebrate the love between fighters: BJ Penn clutching onto Matt Hughes while riding on a motorcycle, Nick and Nate Diaz scowling in unison, Wanderlei Silva overjoyed in the arms of Shogun Rua, it goes on and on. Chris Weidman and Aljamain Sterling just added to this rich history while spitting some bars.

In the parking lot of what we can only assume is a place that Matt Serra can score some chicken parm, the whole Serra/Long team hangs out while Weidman and Sterling cypher. Every MMA fighter is popping up onto magazines nowadays, but you probably won’t see them on the cover of the XXL‘s freshmen list. Chris Weidman took this one, but put on your best pair of Beats by Dre and listen to the battle yourself.

Wait, what’s this? Another video from two years ago? That’s right, these dudes have been rapping together forever. You know what they say, you can never really know another person until you fight them. Maybe it’s the same with rap battles. There’s a special bond that is created there that only a few people are lucky enough to have. This shouldn’t be limited to just Chris Weidman and Aljamain Sterling. Assemble your crews, UFC. Gather your best spitters, Bellator. Let’s have an inter-promotional rap battle.