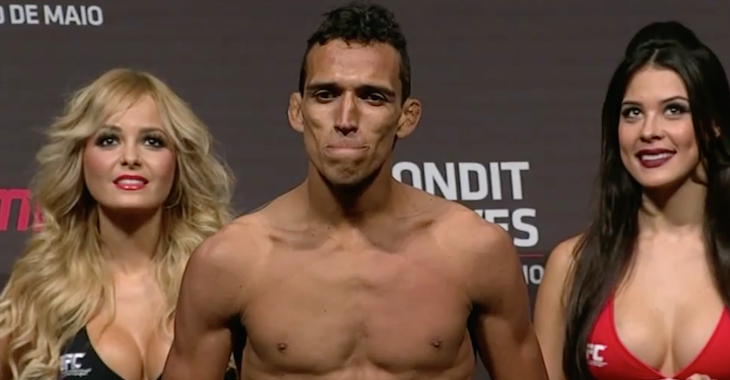 Friday afternoon, #8 ranked UFC featherweight Charles ‘Do Bronx’ Oliveira stepped onto the scale to weigh-in for his ‘The Ultimate Fighter: Latin America 3’ Finale scrap with Ricardo Lamas on Saturday.

Oliveira hit the scales and weighed-in a whopping nine pounds overweight, nearly an entire weight-class, 10 pounds over the featherweight limit if taking into account the extra pound allowance for fighters when weighing-in for non-title fights. Despite that, Ricardo Lamas, who recently had his ‘UFC Fight Night: Manila’ headlining fight with BJ Penn scrapped last month after Penn withdrew from the fight shortly before the event, has chosen to fight Oliveira despite the fact that he weighed-in well over the contracted weight.

Now, in a statement to Guilherme Cruz of MMAFighting, the Chute Boxe team, where Oliveira trains, has blamed his weight-miss on the altitude of fighting in Mexico City:

As Oliveira’s team pointed out, he is coming off a loss to Anthony Pettis just 10 weeks ago, in a performance that saw him drop a 3rd round submission to the former lightweight champion in Pettis’ lightweight debut. Prior to that, Oliveira defeated Myles Jury via first round submission, where he also missed weight. With his weight-miss this week, Oliveira is now tied with John Lineker for the most times missing weight in the history of the UFC with 5 misses. With that being said, Oliveira has only fought 4 of the times he has missed weight, withdrawing from the 5th fight due to illness.

Only time will tell if the lack of a weight-cut will give Oliveira a significant advantage over Lamas.