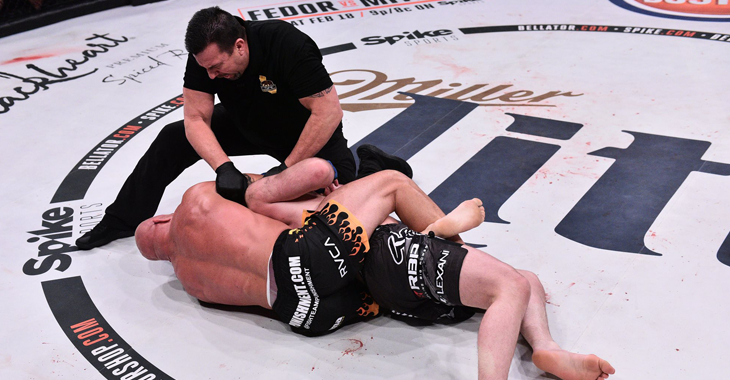 This past weekend, in the main event of Bellator 170, UFC Hall of Famer Tito Ortiz stepped into the Bellator MMA cage against former UFC title challenger Chael Sonnen for a highly anticipated grudge match.

The fight didn’t last long, as Ortiz quickly managed to secure the takedown and ultimately submit Sonnen with a rear-naked choke. While Sonnen tapped to the choke, viewers were quick to question the legitimacy of the fight, questioning whether or not the fight was fixed after footage emerged of Ortiz appearing to tap Sonnen’s hand, in what many assume was a signal. Ortiz was quick to fire back at critics in an interview: Now, referee Big John McCarthy, who was forced to jam his thumb into Ortiz’ trachea to get him to let go of the choke, responded to Ortiz vs. Sonnen fixed fight accusations, saying: “What I would love if I could do it is take people that say that’s a fix (and say), ‘Good, I’m going to put you in that hold that he was in, and I want you to feel it. I want you to see how strong Tito Ortiz really is. I want you to feel the pressure that Chael was under.’ You could see even on the screen how purple his face was starting to get.

“That choke was not what we’d say is a perfect choke. It’s not. It’s on one side of his neck. But trust me, on one side, you start to shut down that one carotid artery, it will put him out. It will just take a lot longer.”