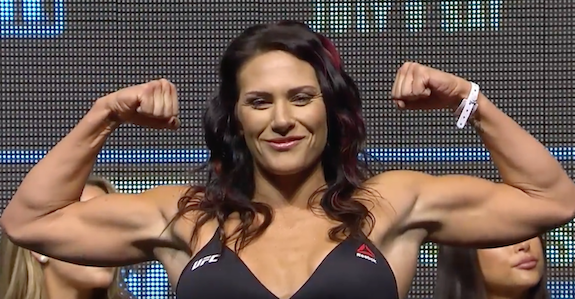 Former UFC women’s bantamweight title challenger Cat Zingano has been absent from the Octagon for nearly a year. In her most recent Octagon appearance at UFC 200 in July of 2016, Zingano returned to the Octagon following a year long hiatus that followed her first round submission loss to Ronda Rousey. When she made her return nearly a year ago, she was handed a unanimous decision loss from Julianna Pena, marking two straight defeats.

While Zingano has taken quite a bit of time off between her last two fights, she isn’t looking to take any tune-up fights when she returns to the Octagon. In fact, Zingano welcomes a fight with arguably the most feared woman in the UFC, Cris Cyborg. Zingano spoke to FloCombat to discuss her next fight:

“I know [a matchup vs. Cyborg] is being talked about, so we’ll see what happens,” Zingano told FloCombat. “And there are some things down at ’35 still, so we’ll see. There are a lot of things I’m holding and considering, but I do think the UFC has a plan for my return.” In regards to a fight with Cyborg, and why Zingano is confident that she can hand the former Invicta FC champion her first loss, ‘Alpha’ Cat stated:

“I’m mean as hell and I don’t fight not to lose,” Zingano said. “I fight to finish fights. I’m aggressive, and I’m big and I’m strong. The resilience and the heart that I have is not something she’s ever had to deal with before.

“Not that the girls she’s fought are any less of a fighter, but I’m a different breed. I’m a different type of fighter. I fight from my heart. The wins take care of themselves when I go out there and I just try to hurt people.

“Our kickboxing is similar. I also know she’s a naturally bigger girl. That weight cut is going to be rough, whether it’s at 140 or 145. She’s not that size in life in general. She’s got some big punches, some big, wide-open things I see. I know my ground is superior. I know my jiu-jitsu is superior. So realistically, I see myself being able to control the cage and put her on her back.”