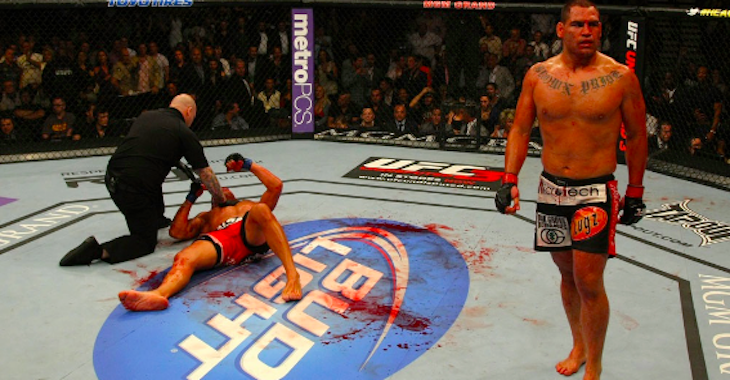 Cain Velasquez is one of the greatest heavyweights ever to compete in mixed martial arts. As a two-time former UFC heavyweight champion, and a fighter who has mauled top-flight opponents like Junior dos Santos (twice), Brock Lesnar, Ben Rothwell, Travis Browne, Cheick Kongo, Antonio “Bigfoot” Silva (twice), and Antonio Rogerio Nogueira, there is simply no denying his status as one of the best heavyweights to ever do it.

Unfortunately, Velasquez might also go down by one of the great what-ifs in MMA history, as an irrefutable top talent whose heyday was riddled with career-joggling injuries. Yes, as great as he is, it’s possible he’s already spent his best years on the on the sidelines. At least, that’s what his chief training partner Daniel Cormier seems to be worrying.

“He’s had a lot of injuries at bad times,” Cormier said on a recent edition of The MMA Hour (via MMA Fighting). “I talked to Cain about this, and it sucks — for a guy who was talented and committed to the sport, he’s probably lost five years.”

Needless to say, Cormier wonders what towering heights Velasquez might have achieved had he not been slowed down by injury. The good news is that he also expects Velasquez to return to the cage soon and close out his career in vintage, destructive fashion.

“Can you imagine what Cain Velasquez’s resume would look like without five years worth of time on the shelf? It’s so sad to think about, but I believe that he has finally gotten himself in a position where his body is going to be able to match his work ethic, his mind, his ferociousness, his mentality, everything, and allow him to go on a run — a long, sustained run — to kinda finish out his career.”

Do you think Cain Velasquez can recapture the UFC heavyweight title in his much-discussed return?