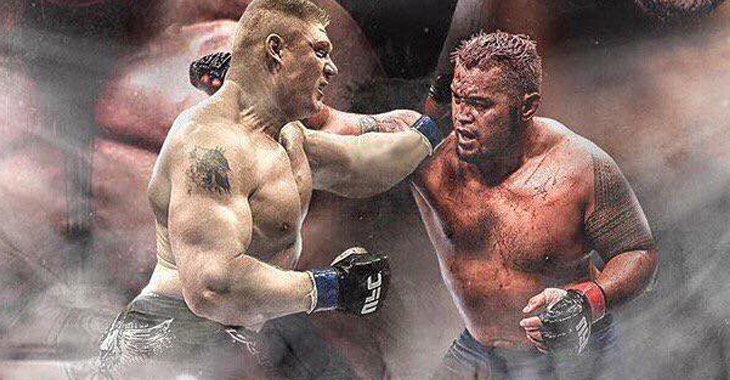 Former UFC heavyweight champion Brock Lesnar is set to return to the Octagon at UFC 200. The WWE superstar will face the devastating striker Mark Hunt in a heavyweight match that will surely attract a lot of viewers for the significant UFC event.

Lesnar’s BJJ coach, Rodrigo “Comprido” Medeiros spoke with MMA Fighting recently on their training and what is in store for the matchup of styles.

“Is Mark Hunt a tough fight? Yes, he is,” “Comprido” said. “I don’t even need to say. If one hand lands… But it wouldn’t make sense if it wasn’t a fight like this. It’s a wrestler against a striker, and that’s nice. It’s a fight that makes sense. That’s what he wants. He wants to test himself against a high level opponent. He doesn’t want to fight a nobody. He wants someone that adds something to his career, otherwise he wouldn’t train as hard and as motivated as he’s training. Mark Hunt is a dangerous fight, and we know that, but I’m 100 percent confident.”

While Medeiros predicts the fight will go to the ground where Lesnar can impose his game as a grappler, he knows the power “The Beast” has with his hands and doesn’t rule knocking Hunt out on their feet.

“I see him winning on the ground, by submission, but anything can happen,” “Comprido” said. “Mark Hunt is one of the best strikers in the UFC, but Brock has heavy hands, too. A grappler like Brock, if one hand lands clean, he can knock you out, or Mark Hunt can get a good position on the ground and submit him. Logic says that Mark Hunt has the advantage standing, and Brock’s advantage is on the ground, but we’ve seen many times that anything can happen. We saw what happened at Fedor’s fight against Fabio Maldonado. You’re the favorite until the cage is closed.

How do you see the fight between Brock Lesnar and Mark Hunt going? Share your prediction for the fight with us in the comment section!