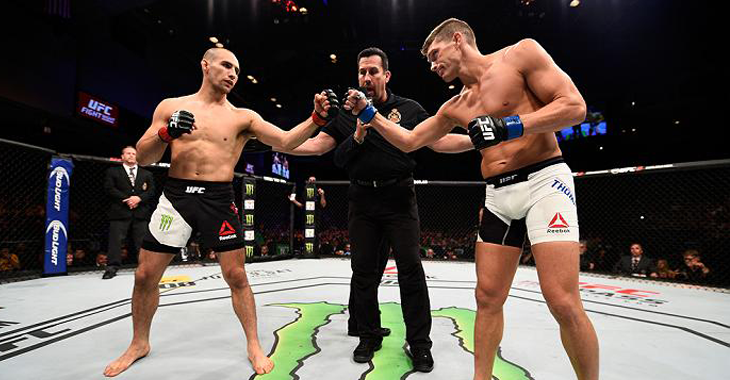 Rory MacDonald and Stephen Thompson put their friendship aside for five rounds in the Octagon as the two fought in the main event of UFC Fight Night 89 over the weekend.

“Wonderboy” was able to pick up a unanimous decision victory over MacDonald and has likely positioned himself as the next fighter to be in line for a shot at the UFC welterweight title.

MacDonald on the other hand fulfilled his last fight on his UFC contract and has expressed that he will be looking to see test out the market as a free agent.

Despite trying to take each other out for five rounds, the two fighters who have trained together in fight camps in the past have nothing but love for one another.

The two posed for a photo together after the fight that Thompson posted to his Instagram account saying, “I just want to say it was def an honor to step in the octagon with this guy last night!! What an amazing martial artist and an even better person!”

I just want to say it was def an honor to step in the octagon with this guy last night!! What an amazing martial artist and an even better person! @ufc @tonythompsonpb @raythompson #ufc #igdaily #iger #photooftheday #pictoftheday