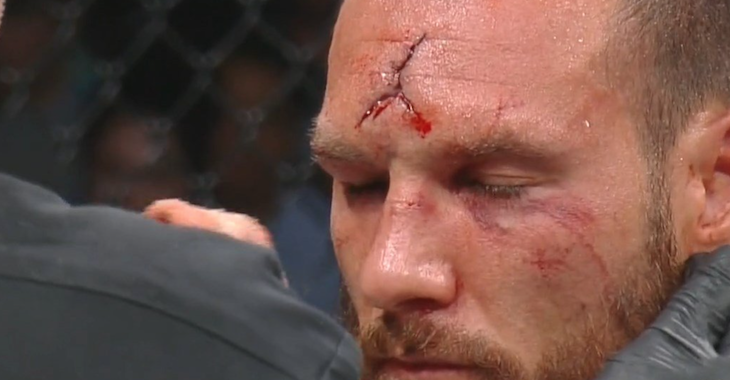 This past weekend at Bellator 181, Brandon Girtz stepped into the cage for a highly anticipated rubber match with Derek Campos. That trilogy saw the two men tied at 1 win apiece, as Campos won the pair’s first fight by unanimous decision in 2013, before Girtz then evened the score in 2015 as he knocked Campos out in the first round.

This past weekend in the pair’s trilogy fight, Campos picked up a 2nd round TKO win after the doctor stopped the fight due to a horrendous cut on Girtz forehead, a cut that many quickly realized looked like the Michael Jordan ‘Jumpman’ logo.

Girtz spoke to MMAJunkie to reflect on the bout, as well as the strange circumstances that led to the fight being stopped between the second and third rounds:

“I thought we were going into a third round,” Girtz told MMAjunkie Radio a few days after Friday’s event at WinStar World Casino and Resort in Thackerville, Okla. “All they kept telling me is, ‘We’re not going to stop it if it doesn’t get worse.’ All I could hear is, ‘It hasn’t gotten worse.’ I’m hearing all the right things. And then third round’s about to start and they’re like, ‘Nope, there’s no third round.’

“It was just baffling. I was feeling good and they were telling me there was no change in the cut from the minute it happened to then. I didn’t feel like I was really taking damage into the cut. So it hurt, man. I was ready for a third round. I thought I was doing what I had to do.

“(The) doctor never said, ‘I’m stopping it’ or anything like that. I think he got out of the ring and then said ‘It’s done,’ because he didn’t want me to plead with him or something. I don’t know. That’s why it was pretty painful. In my heart, I was already going into a third round. And to have it just scrapped like that, it felt really awkward.”

With this loss, Girtz has now lost three straight.