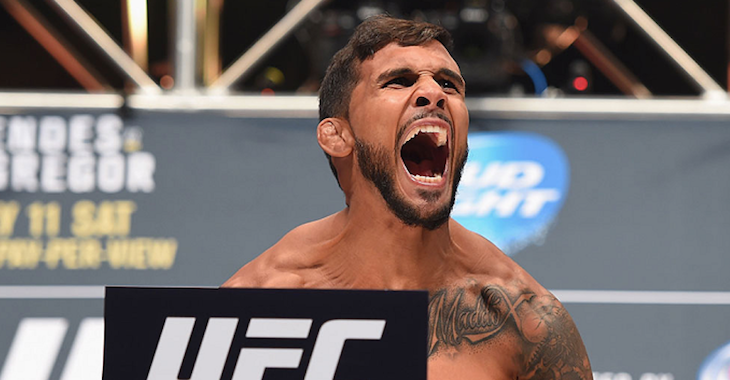 Following the victory, Bermudez called out former UFC lightweight and welterweight champion BJ Penn by politely saying that it would be “really cool” to fight a legend who was also one of his “favorite fighters growing up”.

Penn, who has returned to training under the tutelage of the JacksonWink gym in Albuquerque, is expected to revisit the octagon later this year.

Dennis Bermudez recently spoke with MMAJunkie Radio where he stated that a fight with the UFC Hall of Famer (Penn) is still what he would like next. If not, “The Menace” is happy to settle for a rematch with former title challenger Ricardo Lamas, who defeated Bermudez via submission at UFC 180 in Mexico. His words:

“We’re getting back to the old Dennis Bermudez, man,” Dennis stated in the interview. “I want to be in there and be active. I want to fight this summer and again in November. I want to be on the two biggest cards of 2016. I think I want to fight on UFC 200 and then fight on the first New York card. That would nail it right there. At UFC 200, maybe a rematch with Ricardo Lamas or B.J. Penn. At (the first UFC show in New York), I don’t know.. Max Holloway, Jose Aldo or Conor McGregor.”

Bermudez took time to elaborate more on why a fight with BJ Penn has topped his interest:

“Because he’s famous.” Bermudez stated. “He’s a legend in the MMA world, and I already knocked off two pioneers or legends or big names in the MMA world. He would be a third. And he was one of my favorite fighters growing up.”

Would you like to see a fight between Dennis and our namesake BJ Penn at July’s blockbuster UFC 200 pay-per-view event? Sound off PENN Nation!