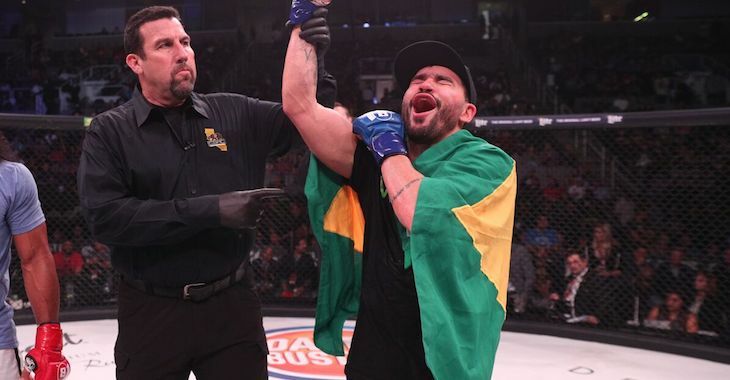 As is so often the case when it comes to Benson Henderson fights, this one was incredibly close. For three rounds, we watched Henderson relentlessly pursue the takedown, effectively shutting down Pitbull’s offense as he did, while Pitbull denied all of those takedown attempts, depriving Henderson of the opportunity to rack up points in the judges’ eyes.

In the end, the judges sided with Pitbull, awarding him a controversial split decision win. As is always the case when it comes to close fights, this one generated some interesting reactions on Twitter. See some of the best ones below:

Is it me, or has nothing really happened so far in this fight? #Bellator183

notice the pace and lackluster entertainment in this matchup…THAT is what I have brought to the table since day 1.

That takedown defense is impeccable

I got Ben winning every round. Call me biased but he should get the W #bellator183 #labelite

Disagree with that decision!

Bullshit on that decision. That was Bens W #bellator183 pic.twitter.com/qDOlK6mogX Controversial or not, this win over Benson Henderson served as another big step toward a lightweight title shot for Pitbull. The Brazilian bomber made sure to capitalize on this fact in his post-fight chat with commentator Jimmy Smith.

“I want the champion,” he said. “I want Brent Primus. Tonight I took down another former champion and I want my shot at that belt. He keeps running from me but now it’s time. I want that belt and after tonight I earned my shot at it. Benson Henderson is a good, tough fighter, but I’ve got my mind on the division title now. You can’t keep running Primus.”

While Pitbull is certainly closing in on a title shot, he might still be behind former champion Michael Chandler in that race. Time will tell.

What do you think of Patricky Pitbull’s close decision win over Benson Henderson?