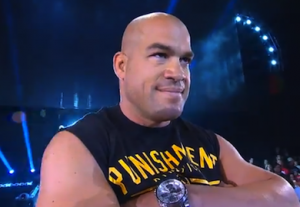 Today Bellator officials announced that the fight between veteran fighter Tito Ortiz and current Bellator middleweight champion Alexander Shlemenko will take place on the promotions first ever Pay-Per-View event, Bellator 120. Ortiz, who hasn’t won a fight since 2011, will make his Bellator debut on May 17 in Southaven, Miss. The fight is scheduled to take place in the light-heavyweight division and will not be a title fight.

Shlemenko called the former UFC champion out, and requested the fight to happen on the first PPV event. Ortiz has been recovering from his most recent injury, a neck injury that happened in November and forced him out of the fight against “Rampage” Jackson. Now Ortiz is healed up and set to go against Shlemenko, who is currently riding a 13 fight win streak. Bellator 120 will feature the much-anticipated rubber match between Michael Chandler and current lightweight champion Eddie Alvarez as its main event.

What do you think, does “The Huntington Beach Bad Boy” have anything left?