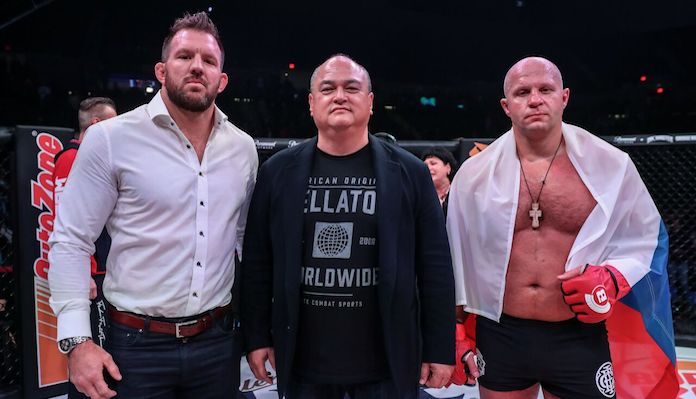 Scott Coker has revealed that Bellator heavyweights Fedor Emelianenko and Ryan Bader could faceoff once again.

‘The Last Emperor’ has been out of the cage since his knockout of Tim Johnson last October. The victory moved his current winning streak to two, as he previously defeated Quinton ‘Rampage’ Jackson in December 2019.

Following his victory in 2019, the 45-year-old revealed he only had two more fights in him. After his knockout of Johnson, the Russian legend once again confirmed his next fight would be his last. Since that time, many names have offered to face Emelianenko in his final fight.

However, the name that Fedor Emelianenko wants most is Ryan Bader. Bellator president Scott Coker revealed in a media scrum on Friday, that the heavyweight has consistently asked for a title shot next. For his part, Bader is fresh off a decision victory over Emelinanenko’s protege Valentin Moldavsky in January.

The two have faced off previously, in the finals of the Bellator heavyweight Grand Prix. At Bellator 214, ‘Darth’ knocked out the former PRIDE champion in round one. Furthermore, the victory saw Bader become heavyweight champion.

While Scott Coker has noted that they haven’t confirmed the fight, they will meet with the Russian soon.

“I’ll tell you that’s a fight Fedor really wants,” Coker said after Bellator 283 this past Friday. “We’ve had that conversation.” (h/t MMAFighting)

“This is his last fight on his contract. He told me he wants to retire, and I haven’t talked to Bader about it. But it’s something, that, you know, it’s hard to say no to Fedor – let’s put it that way. We’ll definitely consider it, but it’s definitely not inked or something that’s imminent. But definitely, we’ll have that conversation.”

Do you want to see Fedor Emelianenko vs. Ryan Bader rematch? Sound off in the comment section below!