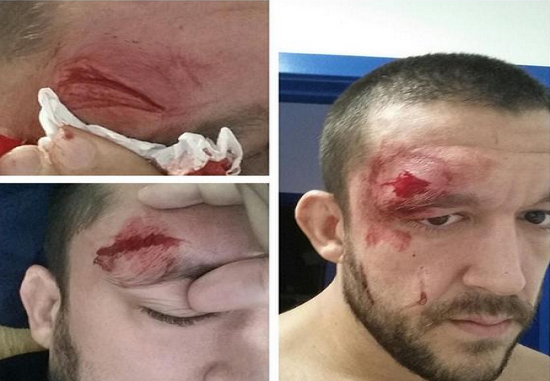 Former UFC fighter Tom DeBlass suffered a gruesome cut while training, and as a result is out of his Bellator 131 bout against King Mo, and by the looks of things according to his Tweet, may not fight again.

DeBlass apologized to King Mo for having to withdraw from their bout in an extended Tweet:

@kingmofh sometimes life throws unexpected things our way. Accidental headbutt did just that two weeks before my fight with @kingMofh this cut is deep and bad. This cut is taking me out of the fight with Mo. As soon as it’s touched in the fight it will bust open. I know so many of you wanted to see this so I apologize, and I felt so great ,as we know injuries happen in MMA and we fighters take the worst of it. Regarding Mo, we already spoke and he’s one of the most respectful guys I’ve talked too. We already spoke of training together when I’m healed. As far as MMA is concerned I’ll never say never, but I can say right now I’m focusing on competing Jiu-Jitsu and improving my Academy. I have no plans to fight right now. Thank you to my manager Danny Liguori for everything and Bellator for being so awesome, you may see me back in there one day. But for now let’s win some more Jiu-Jitsu title