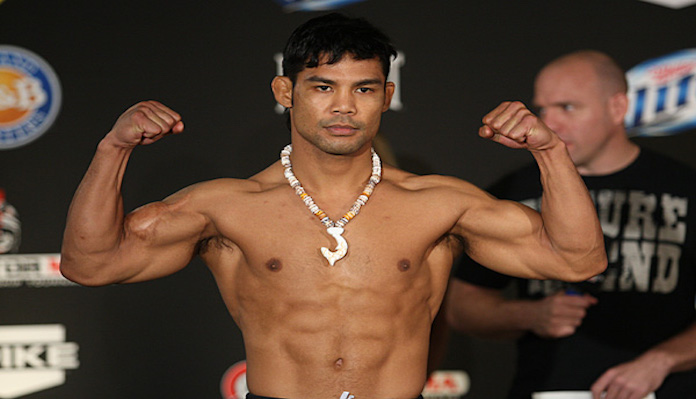 Former Bellator fighter Joe Taimanglo, once a top bantamweight contender, was arrested in Guam for possession of meth and an illegal handgun.

Taimanglo, a 36-year-old native of Guam who is a long-time MMA veteran, was arrested on Thursday in his home country after being found with a gun and narcotics. According to a report from The Pacific Daily News, Taimanglo was seen driving a scooter with expired tags, prompting Guam police officers to pull him over.

According to court documents, officers saw a glass pipe and a handgun on Taimanglo’s scooter. The officers were given consent by Taimanglo to search the scooter, where they found the handgun to be loaded, a glass pipe, and a baggie of a substance found in a fanny pack that later tested positive for methamphetamine.

Taimanglo (24-9-1) made his MMA debut in 2004 and fought primarily for the PXC promotion in Guam. He later competed for DEEP in Japan and racked up a 17-4-1 record before being signed by Bellator in 2013. From 2013 to 2018, Taimganlo was one of the top bantamweight contenders in the promotion. Taimanglo held a 7-4 overall record in Bellator that includes notable wins over both Darrion Caldwell and Joe Warren.

After the win over Warren in March 2018 by split decision, Bellator and Taimanglo parted ways. Taimanglo most recently competed for the WCFA promotion in Bahrain, where he suffered a unanimous decision loss to Abdul-Rakhman Dudaev. He has lost three of his last four fights and his last fight came back in November 2018. Following this latest arrest, there is no guarantee Joe Taimanglo will step into an MMA cage anytime soon.