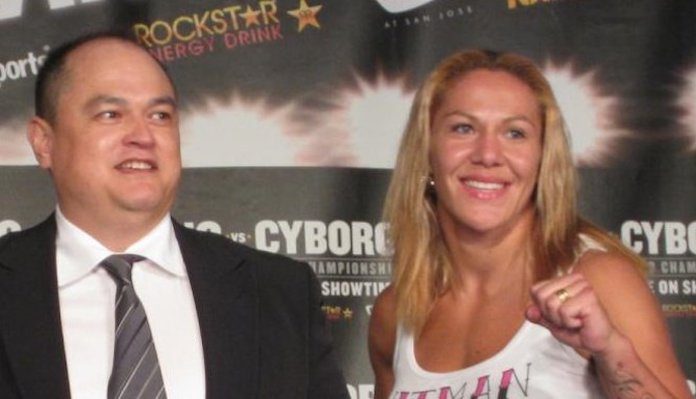 Bellator president Scott Coker says that Cris Cyborg is “the greatest female fighter of all time” ahead of her title fight against Julia Budd.

Cyborg has an incredible 21-2, 1 NC record in her MMA career and didn’t lose a fight between her MMA debut in 2005 and 2018, when she was knocked out by Amanda Nunes at UFC 232. Since then, she picked up another dominant win over Felicia Spencer in the Octagon before a falling out with UFC president Dana White saw her become a free agent and sign with Bellator.

The move to Bellator reunites Cyborg with Coker, who was her promoter in Strikeforce during the height of her career in the early 2010s. Coker says that despite the loss to Nunes last year, he still believes that Cyborg is the greatest female fighter of all time.

Here’s what Coker said this week in a media scrum before Bellator Japan.

“Cyborg is the greatest female fighter of all time. I don’t care what anybody says. I was there in the beginning too, I’ve seen it all unfold, and it’s a much different environment today than it was back then. But I know who’s been dominating for the last 10 years and who’s been destroying people for the last 10 years. 10 years from now we can have a different conversation, see how far different ladies can take it. But as far as today, you have the greatest female fighter of all-time fighting Julia Budd,” Coker said.

Cyborg will look to become the first fighter in MMA history to win a title in the UFC, Bellator, Strikeforce and Invicta FC when she fights Budd at Bellator Los Angeles right now. If she can do so, she might swing back the popular vote to her being the female GOAT, as many fans seem to now side with Nunes after she beat Cyborg head-to-head just last year. Then again, many will agree with Coker and still side with Cyborg.

Do you agree with Scott Coker that Cris Cyborg is the greatest female MMA fighter of all time?