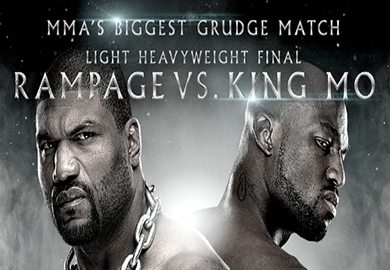 The PPV is on! Bellator confirmed through Twitter that Quinton ‘Rampage’ Jackson and ‘King Mo’ Muhammed Lawal will main event Bellator 120 next Saturday.

Bellator officials are confident that their heated rivalry will translate to PPV sales. “It’s remaining a PPV because it’s a PPV-worthy card,” Rebney said in a recent interview with ESPN. “It’s a must-see card.”

Quinton Jackson and Muhammed Lawal were pretty much set up to fight each other being on opposite ends of a 4-man light heavyweight tournament. After defeating their opponents in the semi-finals, the two squared off in the middle of the cage and almost got into a brawl. There were rumors that it was staged, but those reports have since been debunked.

The Bellator Lightweight Championship will remain around the waist of Eddie Alvarez while he is sitting on the sidelines. He was forced to pull out of his bout with Michael Chandler due to a concussion he suffered a couple weeks back while training. Michael Chandler will still be fighting on the card for a title, however.

Michael Chandler and Will Brooks will be duking it out to decide the Interim Lightweight Champion. Will Brooks is 13-1 in his MMA career and most recently defeated Alexander Sarnavskiy to win the Season 9 Lightweight Tournament. It has not been confirmed, but it is expected that the winner of this fight will go on to face Eddie Alvarez if he returns to a Bellator cage.

Here is what the PPV portion of the card is looking like after the recent shakeups: