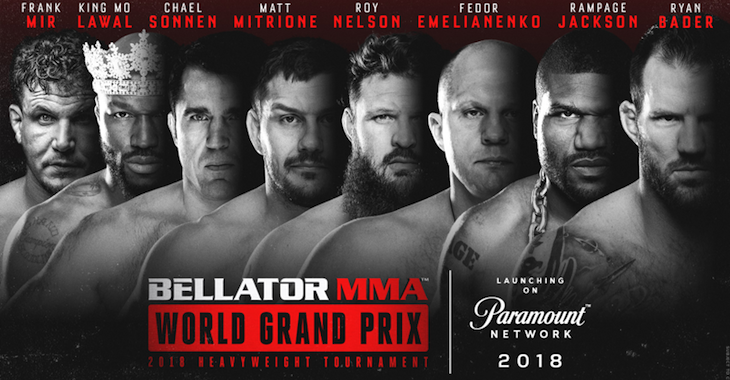 Bellator MMA’s upcoming heavyweight Grand Prix is one of the most talked about events in MMA right now.

The next bout of the first round will occur on February 16, when former UFC heavyweights Matt Mitrione and Roy Nelson will collide in a rematch of a 2012 bout, which Nelson won by knockout.

Ahead of this tournament’s January kick-off, Bovada has released betting odds for it.

As widely expected, streaking heavyweight star Matt Mitrione is favored to win this tournament, while dangerous light heavyweight champion Ryan Bader clocks in right behind him as the second biggest favorite.

From there, Frank Mir is the next biggest favorite, while Roy Nelson and Fedor Emelianenko reside in the middle of the pack, and oddsmakers have the least confidence in King Mo, Sonnen and Rampage. Interestingly, the bookmakers believe that “any alternate fighter”  is more likely to win this tournament than King Mo, Sonnen or Rampage. We don’t even know who the alternates will be yet. Ain’t that a slap in the face.

The odds for the first-round matchups have also been released. See those below:

Who do you think will win this tournament? Do any of these fighters strike you as live underdogs?