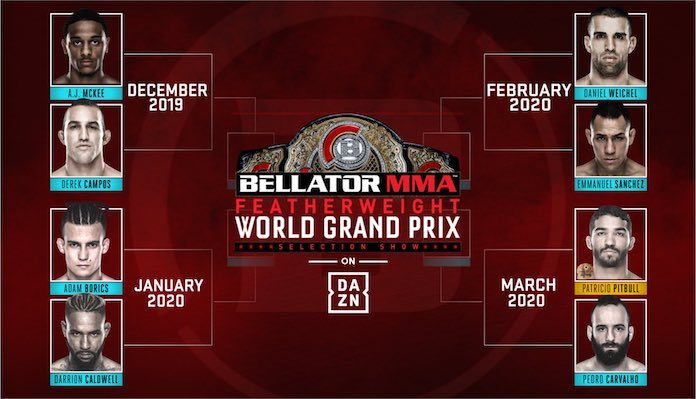 Check out the bracket below, courtesy of Bellator president Scott Coker’s Twitter.

In December 2018, the undefeated rising star prospect AJ McKee will take on Derek Campos. McKee had the first overall pick and chose to fight in December in Hawaii. Campos had the sixth overall pick and he decided to go with McKee in what should be a barnburner of a fight. McKee defeated Georgi Karakhanyan via first-round KO win advance to the quarterfinals, while Campos won a lopsided decision over former champ Daniel Straus in his opening round bout.

In January 2020, stud prospect Adam Borics takes on former Bellator bantamweight champion Darrion Caldwell in Los Angeles. Borics defeated Pat Curran via TKO to advance to the quarterfinals and he chose January as his preferred date. Caldwell actually chose March with the third overall pick, but was pushed to January instead (more on that below). Caldwell advanced to the quarterfinals with a decision win over Henry Corrales.

In February 2020, Daniel Weichel takes on Emmanuel Sanchez in a rematch. Weichel defeated Saul Rogers to advance, while Sanchez beat Tywan Claxton. Weichel and Sanchez previously met in 2016, with Weichel edging out a split decision win. Weichel originally had the fourth pick, and Sanchez chose the rematch with the fifth overall pick.

And finally in March 2020, the champ “Pitbull” puts his title on the line against Pedro Carvalho. “Freire” dominated Juan Archuleta in the opening round, while Carvalho defeated Sam Sicilia. Caldwell originally chose March and was set to fight Carvalho, who chose the Caldwell fight with the seventh pick. However, because he was the champion, “Pitbull” got to choose his preferred date and opponent in a twist that shook up the bracket. Although Borics was the lone fighter without an opponent left on the board, “Pitbull” chose to bump Caldwell out of his spot and take on Carvalho instead.

Overall, it looks like a tremendous bracket with four very exciting fights. If the opening round matches were any indication, fans have a lot to be excited for in the quarterfinal round.

Which Bellator featherweight grand prix quarterfinal fight are you looking forward to the most?