Bellator welterweight champion Rory MacDonald will face the man he defeated to win the title Douglas Lima in the headliner of tonight’s Bellator 232 event.

MacDonald (21-5-1 MMA) got to the Bellator welterweight grand prix finals by defeating Neiman Gracie and going to a majority draw with Jon Fitch.

Meanwhile, Lima (31-7 MMA) earned his rematch with MacDonald by scoring a submission victory over Andrey Koreshkov, followed by a sensational knockout win over Michael ‘Venom’ Page. 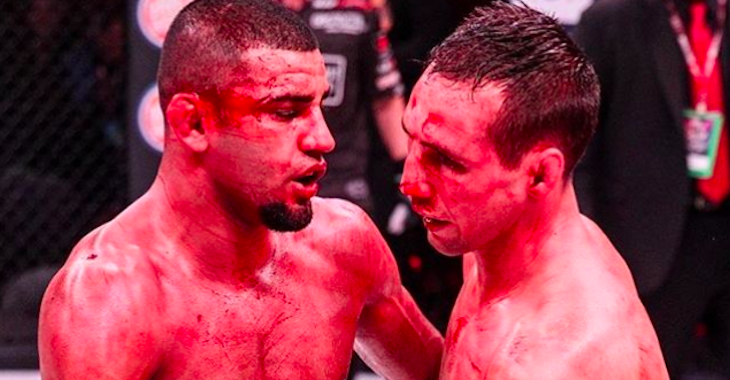 Rory MacDonald and Douglas Lima had originally collided at Bellator 192 in January of 2018, in what proved to be a ‘fight of the year’ candidate. ‘The Red King’ ultimately emerged victorious by unanimous decision.

Round one of the Bellator 232 main event begins and Douglas Lima takes the center of the cage. MacDonald circles to his left. He switches stances and then circles to his right. Lima with a big low kick. He misses with a follow up jab. Lima with a good kick to the body. MacDonald continues to move. He fakes a takedown attempt and lands a nice left over the top. Lima just misses with a front kick. Rory responds with a jab to the body. He throws a right that misses the mark. Lima stalking forward. Rory shoots for a single leg and Lima does a good job of defending. Rory has Douglas pressed up against the fence. The fighters trade knees. Rory is looking to secure double underhooks. Both men are working hard from the position. Rory MacDonald locks in the double underhooks. He clasps his hands and looks for a trip. He gets it but the fence keeps Lima up and we are back to the clinch battle. The crowd is growing restless. Lima attempts to break free but can’t do so.

Round two begins and Douglas Lima throws a jab. Rory avoids and circles to his right. MacDonald misses with a left hook. That had bad intentions. MacDonald is bouncing around using a ton of movement. Lima attempts to slow him down with a low kick. Lima leaps in with a jab that falls short. He lands a follow up low kick. Rory is being very patient in the early stages of this fight. Lima with another low kick. Rory with a one-two combination. Lima comes forward with a body kick. Rory MacDonald circles and then lands a jab. Halfway through round two. Lima misses wit a left hook and Rory shoots for a takedown. He can’t get it but he presses Douglas against the fence. Two minutes remain as the fighters trade knees from the clinch. Lima breaks free. He throws a jab that misses. The former champ moves forward and lands a right hand. MacDonald replies with a hook. A good right hook lands for Lima. He lands a crisp jab now. Rory is on the retreat. Lima presses forward and lands a low kick. He misses with a wild right. The horn sounds to end round two.

Round three of the Bellator 232 main event begins and Douglas Lima lands a low kick to start. Rory MacDonald shoots in with a wild takedown attempt but Lima stuffs it easily. The former Bellator champion looks to close the distance but Rory stings him with a jab. MacDonald just misses with a big overhand right. He shoots in for another takedown but once again Lima is able to defend. Rory presses him against the fence and we are back to the clinch. MacDonald locks in double underhooks. He is going to have to spin Lima off the fence and look for a trip or sweep. Douglas cancels those plans by breaking free and landing a jab. Rory lands a double jab. Lima with a right hand. Rory ducks under the punch and forces the clinch. Lima immediately breaks free. Rory lands a jab to the body. Under two minutes remain. Douglas Lima with a hard low kick. Rory circles to his left and then his right. Lima is trying to cut him off. He lands a front kick to the body. Rory replies with a jab. Lima leaps in with a combination but MacDonald avoids. Under a minute to go before championship rounds. Lima with a jab. Rory shoots in but Douglas defends with ease. Rory with a combination now. He is looking to press the action here. He lands a right hand and then a kick. The horn sounds to end round three.

Round four of the Bellator 232 headliner begins and Rory MacDonald quickly takes the center of the cage and shoots in for a takedown. He pushes Douglas Lima against the fence and lands a knee. Lima breaks free and fires off a jab. He lands a massive low kick which buckles the leg of ‘The Red King’. Rory circles out. He appears to be fine in terms of movement. MacDonald with a straight right but Lima ducks under. Rory with a good kick to the body. Lima fires back a lead right. Rory shoots in for a takedown and Lima stuffs it and lands an uppercut. That had to be demoralizing for Rory. Halfway through round four now. Rory misses with a spinning back fist. He slips and Douglas kicks him in the leg. Lima goes high with a kick, Rory blocks it but stumbles into the fence. Douglas follows him there and Rory clinches and pushes Lima against the fence. He begins working some short punches. He looks for a trip takedown but it is not there. Lima switches the position and lands a knee. Rory now does the same. One minute remains in the fourth round. Another good knee from Douglas Lima. The fighters break. Rory misses with a front kick. So does Lima in return. The Canadian attempts a head kick and then a superman punch that falls short. Round four comes to an end.

The fifth and final round of the Bellator 232 main event begins and Rory MacDonald misses with a right hand. Douglas Lima snaps a jab. Both men land good hooks. Lima with another crisp jab. Rory MacDonald with a takedown attempt. He gets it but Lima reverses and winds up in top position. That has to be deflating for the reigning Bellator welterweight champion. Lima is working from full guard here. Rory is trying to force a standup. Just over three minutes remain. Rory looks for an armbar but Douglas postures up and lands some big punches. Rory turtles and gives up his back. Douglas Lima with big shots now. He has Rory pinned against the cage. He unloads a pair of big right hands. Rory is looking to scramble back to full guard and does just that. Some short shots from Lima. Rory attempts to scramble and reverse. He does. That was nice. Douglas rolls for a heel hook. Rory steps out and winds up on top. He immediately begins looking for a finish. He needs it. Rory MacDonald with some short punches. He lands a good left hand and then a right. More shots from MacDonald he is unloading now. But the horn sounds and Lima survives. Douglas should take this fight on the judges scorecards.

Things are heating up here in the fifth and final round between @Rory_MacDonald and @PhenomLima!

Who would you like to see Douglas Lima fight next following his decision victory over Rory MacDonald at tonight’s Bellator 232 event? Sound off in the comment section PENN Nation!