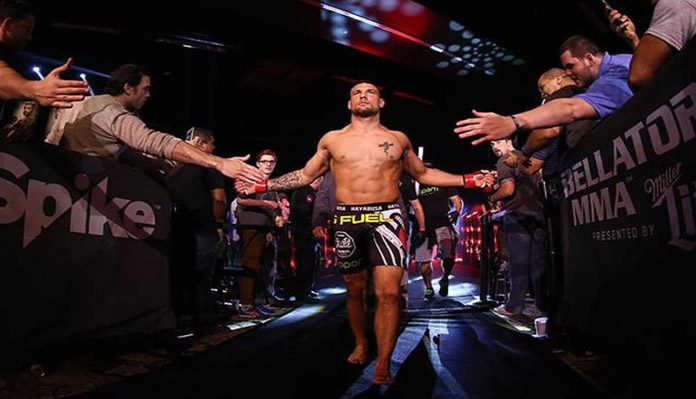 Bellator 219 from the Pechanga Resort & Casino in Temecula, California sure delivered.

The televised portion on of Bellator 219 Paramount network concluded with a wild lightweight scrap between Brandon Girtz and Saad Awad. However, the Viacom owned promotion still had seven fights for their usual post-lim showcase. Many of those fights were entertaining as well.

Let’s take a look at the biggest winners from an absolutely insane night of fights.

A fighter in every sense of the word, Daniel Straus completed his comeback at Bellator 219 when he submitted Shane Kruchten in the first round of their co-main event fight over the weekend.

Straus, who was very emotional after his fight with Big John, was quick to point out that this is just the beginning of his comeback. And that he will look to move back down to featherweight where he is a former two-time champion.

In a weekend full of great MMA stories, Straus’ comeback is a real feel good.

He may not have had the luxury of fighting national television at Bellator 219, but none the less, David “The Caveman” Rickels found a way to get his name trending in an otherwise slammed weekend of MMA.

Rickels is known for his over the entrances and he did not disappoint in his record-setting 22 walkout. (via Twitter)

All gimmicks aside, Rickels is a pretty good fighter too. He defeated a very tough AJ Matthews albeit via an unfortunate eye injury due to a punch.

Regardless, “The Caveman” leaves the Pechanga Resort & Casino on a high note.

If you haven’t familiarized yourself with Shawn Bunch yet, you better take the time because the 36-year-old American Kickboxing Academy bantamweight is on a roll.

In his second stint with the Viacom owned promotion, Bunch has knocked off Joe Warren, and now, the highly regarded, Dominic Mazzotta in consecutive fights.

The win makes it five in a row for Bunch. Don’t look now but the bantamweight division could get really hot this summer.

Brandon Girts returned to the Bellator cage after a year away due to a shoulder injury. Welcome back sir, we missed your beautiful violence.

You always know what you’re going to get when Girtz fights. Much like his teammate Justin Gaethje, Girtz puts his heart and soul into this fight game. A trait that is overtly evident by his performances.

Girtz told “Big” John McCarthy during his post-fight interview that he would like to get back in the cage as soon as possible. And in that regard, we all win.