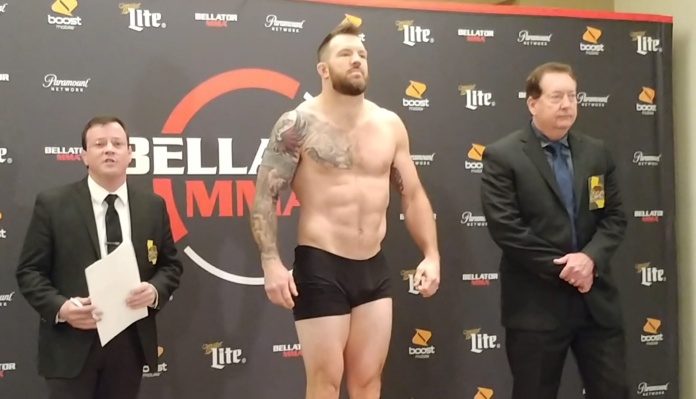 It’s going down! The Bellator heavyweight title is set to get a new owner as the legendary Fedor Emelianenko (38-5) looks to prevent current light heavyweight champion Ryan Bader (26-5) from making history.

Also in action will be the debuting former WWE star Jake Hager who tipped the scales for the very first time in MMA on Friday to hit within the heavyweight mark.

Red-hot featherweight prospect Aaron Pico returns to the cage where he looks to add another finish to his quickly growing resume. Henry Corrales, on the other hand, plans on stopping Pico’s momentum.

Rounding out the card is a bantamweight title eliminator between Juan Archuleta and Ricky Bandejas as well as another debut which features grappling sensation AJ Agazarm at lightweight vs Jesse Roberts.

To see all the fighters’ weights for Bellator 214 tomorrow night, just take a quick glance below and don’t forget to catch our BJPenn.com live results or keep up with our event play-by-play on Twitter during fight night if you’re unable to watch. We’ve got you covered.